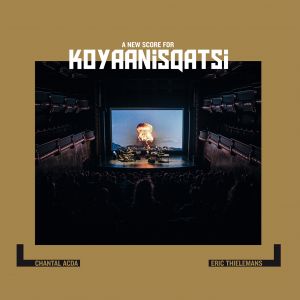 order
wishlist
Dark-folk songwriter Chantal Acda and beyond drums-percussion musician extraordinaire Eric Thielemans propose, after Phillip Glass, a new score for Koyaanisqatsi, re-actualising the incredibly beautiful, raw, rhythmic and touching images of this 80-ties cinematographic masterpiece.
Slow deep electric waves, lonely synths in sonic desert landscapes, rhythmic pulses, transporting drums and bells, and deeply longing sounds and voices make up the audible fundamentals of this imagined, neo shamanic, ritualistic music to accompany the Earth as it keeps on supporting our post human frenetics even today. This release contains a selection of the musical material scored for a live performance together with the screening of the movie. The live performance premiered on Film Festival Gent and Vooruit in the fall of 2022.
Based in Belgium, Dutch-born Chantal Acda (born 1978 in Helmond) has worked under the Sleepingdog moniker since 2006, making three acclaimed albums that closed on the 'With Our Heads in the Clouds and Our Hearts in the Fields' (2010) album for which she collaborated with Adam Wiltzie (Stars of the Lid, A Winged Victory For The Sullen). They toured the UK and Benelux with Low in 2011. After all this, it was time for her first real solo record. Playing in various formations (Isbells, True Bypass, Marble Sounds) had made her conscious of the patterns that we all, as humans, share in. So, she sought out kindred spirits with whom she might record an album filled with freedom and intensity, and who were conscious of the patterns we so often fall back on. Nils Frahm was the first of these to cross her path. The inventive German pianist and producer is an intense and adventurous performer and was a perfect match for it. Acda also experienced a direct bond with Peter Broderick, a multi-instrumentalist known from his solo work (on labels such as Bella Union and Erased Tapes) and from his work with, among others, Efterklang. Cellist extraordinaire Gyda Valtysdottir from Icelandic group Múm had previously worked with Chantal Acda as a member of the Sleepingdog live band. And lastly, Shahzad Ismaily stumbled into this picture by chance, but when Acda and he found themselves in the same room they formed an instant rapport. After this first record, 3 other solorecords followed. Chantal Acda kept on searching for a deeper connection with the outside world and recorded "The Sparkle In Our Flaws" (2015) and "Bounce Back" (2017). She also released some live recordings with her band and also the highly respected jazz guitarist Bill Frisell (2018). These records were released on the German label Glitterhouse. Chantal Acda and her band toured with these records in Europe. In 2019 she created her first music/theatre performance P_wawau for Oerol Festival, The Netherlands. She worked with Valgeir Sigurdson (Björk, Bonnie Prince Billy,...) and singers from Het Nederlands Kamerkoor. As a result of this, she released the recorded music: Puwawau (2019). In 2021 she released her most recent album Saturday Moon. (2021) For this album she worked with her band (Eric Thielemans, Alan Gevaert, Gaetan Vandewoude and Niels Van Heertum) but also with Bill Frisell, Shahzad Ismaily and Mimi and Alan Sparhawk (Low). Saturday Moon was very well received, internationally, by the press.
Belgian drummer Eric Thielemans is one of the most idiosyncratic figures in Belgian music, someone who not only demonstrates that special musicians always seek out (and find) their own place, but above all that they always remain students of the art of questioning and listening. No musician better illustrates the difference between playing music and playing with music than percussionist Eric Thielemans. He gets to the heart of the matter with an at times extremely minimalist approach, but on the other hand he frequently relies on a range of objects beyond the regular drum kit: a drum placed on its side, a bicycle wheel with a bow, hands and the body.
order wishlist
published in September 2022
white vinyl
18.00 €
EAN : 5411867335245
in stock