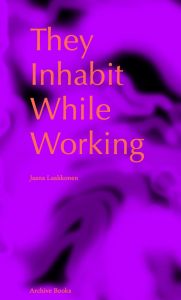 order
wishlist
A collection of texts by the artist and quotations through which Jaana Laakkonen develops reflections on her own practice and on the challenges of her work.
Elsewhere critical thinking and mundane life have followed separate paths, one rending the other impossible or irrelevant. Somehow, in some worlds, you can't do one while doing the other. In Jaana Laakkonen's book we have a record of the successful transgression of this binary prohibition developed through years of careful artistic practice and living with reading. Perhaps, while exploring this book, you also notice how the spine of the book cracks as you open it, how the paper feels in your hand. Perhaps you have wondered about the trees that makeup its matter. Perhaps you have heard about how artists work and wonder what it would mean for one to write a book? Especially if they had been reading post-humanist feminism or were not so bothered about art all the time?
They Inhabit  While Working contains numerous entangled elements none of which act as a satisfactory base to help us organise the rest if we are trying to solve its logic. But the text is not a puzzle or test, and in the end you can accept it as an invitation to explore your own mode of life, to try to observe your own world and then to go even further. The book is made up of different types of writing, the most obvious is the writing that comes from thinking about, and recording, a lived, artistic practice. It takes several forms, sometimes like a journal or report or epistolary notes to an unnamed reader. The second type of writing is selections of quoted texts which interweave and parallel the other parts. The quoted texts are not included in the book to authorise, or in some other way to propose hierarchies nor to organise our reading. Rather the quoted texts move through the rest of the book like the interference of ripples on water.
Jaana Laakkonen (born 1985) is Finnish visual artist. Her practice is affected by recent realist philosophies, eco-feminist and post-humanist thinking, which all share starting point in challenging dichotomies of Western modernity derived from nature-culture dualism.
order wishlist
published in September 2021
English edition
11 x 18,5 cm (softcover)
176 pages
15.00 €
ISBN : 978-3-948212-46-9
EAN : 9783948212469
in stock