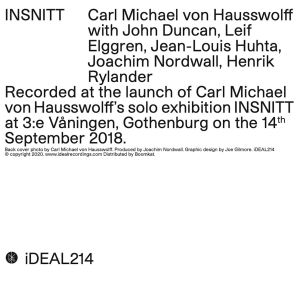 order
wishlist
An industrial and psychedelic sound piece recorded at the opening of CM von Hausswolff’s solo exhibition “INSNITT” at 3:e Våningen, Gothenburg, in 2018, with John Duncan, Leif Elggren, Jean Louis-Huhta, Joachim Nordwall, and Henrik Rylander.
Arch explorer of EVP and paranormal recordings, CMvH is joined by John Duncan, Joachim Nordwall and other members of the Swedish avant fraternity at the opening of his 2018 solo exhibition in Gothenburg.
INSNITT captures 30 minutes of roiling subharmonic frequencies and anxious scrabble made at 3:e Våningen, Gothenburg on September 14th 2018. It arrives over 40 years since his first recordings to witness the Swedish polymath flanked by a coterie of longtime collaborators including Leif Elggren, Jean Louis-Huhta, and Henrik Rylander, plus the aforementioned, charging the air with stressed electronics that resemble the sounds of shearing metal and hi-pitched, whirring mechanicals.
Their massed effect is saturated with sense of hyperrealist psychedelia, appearing to physically keen and lurch in 3D in a way that ultimately makes us feel seasick and rinsed out by the end. Perhaps it’s best recommend to those listeners with strong sea legs and a tolerance for this kind of northerly climate sounds.
Since the late 1970s, composer, visual artist and curator Carl Michael von Hausswolff (born 1956 in Linköping, Sweden, lives and works in Stockholm) has worked as a composer using the tape recorder as his main instrument. He has collaborated with numerous other artists such as Erik Pauser, Leif Elggren, Andrew McKenzie, Zbigniew Karkowski, Graham Lewis, David Jackman and Kim Cascone. His works have been presented at biennials in Istanbul and Johannesburg and also at Manifesta 1 in Rotterdam (1996), Documenta X in Kassel (1997) and the Venice Biennials in 2001 and 2003. In 2004, he participated in the Liverpool Biennial.
order wishlist
Published by Ideal Recordings.
published in May 2021
17.00 €
in stock