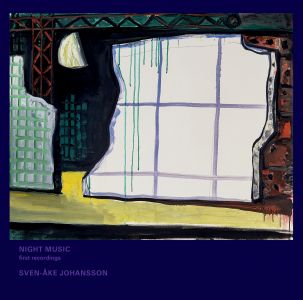 order
wishlist
"Night Music" unearthes Sven-Åke Johansson's very first recordings from 1964—made with his Tandberg tape recorder in the Kronenburg Bar, a dive bar in the red-light district in Münster/Westfalen (West Germany). There he performed jazz versions of popular songs and standards with Uwe Wegner (piano) and Gerold Flasse (double bass), sometimes joined by Dutch singer Jenny Gordee. Young Udo Lindenberg was a frequent guest at the Kronenburg Bar
Side A of the LP features 7 songs from the Kronenburg Bar. Selected in addition, on side B and two CDs, are a later jazz quartet and a quintet: "I Hear Music – Mighty Fine Music", recorded 2001 in the b-flat club in Berlin with Axel Dörner, Henrik Walsdorff, Felix Wagner, Stephan Bleier, and Johansson. Finally "In the Heat of the Night" from 2012 with the Coolquartet (Dörner, Zoran Terzić, Jan Roder, Johansson), from the club Naherholung Sternchen in Berlin.

"The performances at the Kronenburg Bar were inspired by a belief in the absolute healing message of jazz (even in a red-light bar). During the pauses, a Hungarian Jew performed alone; she sang the Israeli folksong 'Hava Nagila' in this red-light milieu, very disconcerting in post-war Germany circa 1964." (Sven-Åke Johansson)
Edition of 300 in full-colour sleeve with artwork by Karl Horst Hödicke on the front and labels, and 8-sided booklet.
Sven-Åke Johansson (born 1943 in Mariestad, Sweden) is one of the style-defining drummers of the German free jazz era of the 1960s and 1970s. From the 1980s onwards, he pursued an artistic path largely independent of institutions and groups as a music performer in the circles of fine arts and new music. Among other things, more than fifty record releases, a number of music theatre pieces, radio plays, pictorial works and a lively touring life are among his oeuvre.