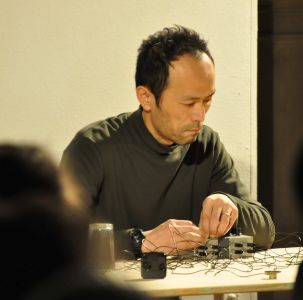 order
wishlist
A split LP featuring two complementary experimental sound performances.
“The Festival Experimentelle Musik is a music festival in Munich, organized by Stephan Wunderlich and Edith Rom, that has been held annually in December since 1983. One of the festival's unique characteristics is the way the performances are organized: Each is limited to 20 to 25 minutes and all take place in direct succession without pauses, on previously set-up small stages.
In 2017, Seiji Morimoto and Yan Jun performed after each other. Seiji's piece was called 'ring + balance', he used small speakers, microphones and amplifiers on a table to create feedback rings that were eventually distorted by alarm clocks. Yan performed 'solo with background' in which he sat on a chair making vocal and body gestures and had two audience members announce the elapsed time every 3 or 5 minutes, respectively, according to their own inner clocks.
As a spectator, I felt that the two performances had something in common. Their very quiet and experimental nature—in the sense that it was impossible to anticipate what would happen and when, if at all—made the audience listen not only to the sounds but also to the situation that had been evoked. When I met Seiji a few weeks later in Berlin, it turned out that he had a similar feeling. We asked Yan and the idea was born to make a split LP of both recordings.”
Alexander Meyer, Edition Telemark
Edition of 300.

The performances were recorded by Albert Dambeck and carefully mastered for vinyl by Werner Dafeldecker. Audience noises are an intended part of the recordings.
Seiji Morimoto (born 1971 in Tokyo) studied musicology at the Kunitachi College of Music, graduating in 1996. During this period he began to play the electronic pieces by John Cage and his own sound performances. Since then he has been creating sound performances, installations and videos. In 2003 Morimoto moved to Berlin, has performed and exhibited in many international festivals including transmediale in Berlin, Experimental Music Festival in Munich. He is interested in the uncertain acoustic appearances between usual objects, for example water and stones, and the technical medium.
Seiji Morimoto has collaborated with Takehisa Kosugi, Keitetsu Murai, Olivier Di Placido, Francesco Cavaliere, Olaf Hochherz, Rius van Alebeek, Ignaz Schick, Luciano Maggiore, Crys Cole, Felicity Mangan, Alessandra Eramo, Nicolas Wiese, Kakawaka, Seijiro Murayama, Jamie Drouin, Hannes Lingens, Johnny Chang, Katsura Yamauchi, Makoto Oshiro, Yan Jun and many others.
He is curator of the concert series Experimentik at Tik Nord in Berlin, Friedrichshain.
Yan Jun (born 1973) is a musician and poet based in Beijing. He is working on improvised music, experimental music, field recording, organizing and writing. alongside of at venues, he goes to audience's home to play with the environment and what else available in the room (Living Room Tour project). Also amplifying body movements or other performative elements in a simple manner. He is member of FEN, Tea Rockers Quintet and Impro Committee, and founder of the guerrilla label Sub Jam.
order wishlist
published in February 2021
22.00 €
in stock