In Pieces – Writings on Art, Etc. 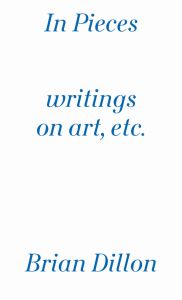 wishlist
A collection of critical, polemic, and personal essays composed in the past decade.
Writing about such major artists as Diane Arbus, Claude Cahun, and William Eggleston, Brian Dillon is interested in the slippages between life, work, and reputation. He attends to the formal strangeness of the art of Julia Margaret Cameron, Hannah Höch, Eileen Gray, and Loie Fuller. And he finds contemporary echoes of their dissident modernism in the sculpture of Helen Marten, Eva Rothschild, and Enrico David. In writing about contemporary writers such as Eimear McBride and Claire Louise Bennett, he is looking for the kind of formal adventure he is convinced can and must accompany the personal or political. Dillon's personal essays include his memories of the Prozac craze of the 1990s, an essay about the influence of David Bowie, and a piece about a family member's paranoid relationship with photography. The book concludes with three reflections on England and Englishness: direct and oblique perspectives on living as a European writer in the midst of the Brexit crisis.
Brian Dillon (born 1969 in Dublin, lives and works in Canterbury) is the UK editor of Cabinet magazine and AHRC Research Fellow in the Creative and Performing Arts at the University of Kent. He is the author of Tormented Hope: Nine Hypochondriac Lives (Penguin, 2009) and a memoir, In the Dark Room (Penguin, 2005). His writing appears regularly in such publications as frieze, Artforum, the Guardian, the London Review of Books, and the Wire.
wishlist
Graphic design by John Morgan Studio.
2022 (publication expected by 4th quarter)
English edition
12 x 19 cm (softcover)
300 pages (25 b/w ill.)
20.00 €
ISBN : 978-3-95679-287-8
EAN : 9783956792878
forthcoming