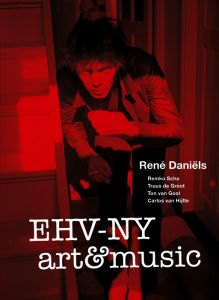 order
wishlist
A zine celebrating René Daniëls and his love for New York and music.
Betrayal Takes Two is a series in which guest editors curate a zine at the invitation of Carlos van Hijfte and Ton van Gool. The guest editor/curator is asked to help build a zine from his/her own work and pieces from the collection of posters, flyers and other (music realated) artwork that Carlos and Ton rescued from the 70's and 80's as well as the photos they took in that era.
René Daniëls: EHV-NY was put together in close collaboration with Marleen Gijsen and René Daniëls to celebrate the work of the Dutch painter René Daniëls and his love for New York and music. With texts by Remko Scha, Truus de Groot, Ton van Gool and Carlos van Hijfte, a selection of drawings, notes, and stills from Super 8-movies Daniels made in New York.
René Daniëls (born 1950 in Eindhoven) occupies a prominent place in the history of contemporary art from the later half of the 20th century, despite the fact that his career was abruptly interrupted in 1987 after he suffered a stroke. Emerging in the late 1970s, when figurative and expressive painting once again became popular, Daniëls soon developed an original, personal language.
Although he enjoyed early recognition, Daniëls had no qualms about experimenting with different pictorial styles. Nevertheless, certain motifs recur under constantly changing forms, following an associative, dream-like logic. Not unlike a composer, Daniëls devises variations on a theme. From 1984 onwards, one motif was to play a dominant role: that of an exhibition room seen in perspective.This form, resembling a bow tie, is reproduced in compositions in which he plays with mirroring effects, overlapping layers, or changes of direction.
order wishlist
Contributions by René Daniëls, Remko Scha, Truus de Groot, Ton van Gool, Carlos van Hijfte, Lee Ranaldo, Monique Voorhout, Catharine Ceresole.