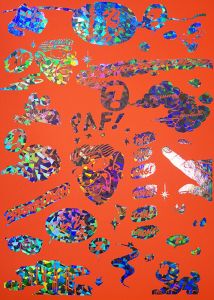 order
wishlist
Artist's book: an illustrated collage-book made up of recurring visual elements from Franco-Belgian comics. The publication is designed in the traditional format of the bande dessinée.
The latest book of Ilan Manouach, Compendium of Franco-Belgian comics takes as a starting point the 48cc (48 pages, colour printing, hardcover) comic book format. The name contemptuously christened by the alternative publisher L’Association, points to the product of a normative and just-in-time book industry that dominates the French-speaking publishing landscape. During a single afternoon Manouach purchased a selection of forty-eight second hand 48cc books and after careful reading he built a non-exhaustive idiosyncratic index of the elements considered to generally define the tradition of franco-belgian comics. Among a variety of comics proto-memes, meta-narrative devices, paratextual elements and other hovering dark clouds, shark wings, identity stereotypes and body-shaped holes, the Compendium presents itself as an orchestral comic book, where instantiations of its typology, freed from the imperatives of specific narratives can be read as the in situ building blocks of the European BD.
Ilan Manouach (born 1980 in Athens, lives and works in Athens and Brussels) is a musician, a book publisher and a multidisciplinary artist with a specific interest in conceptual and post-digital comics. He currently holds a PhD researcher position at the Aalto University in Helsinki (adv. Craig Dworkin) where he examines the intersections of contemporary comics, art and poetry. His work claims for the importance of comics as a materially self-reflexive medium, unaffiliated to any general art history. He has more than twenty published bookworks under his belt, solo exhibitions to important comics events worldwide. He is mostly known for Shapereader, a tactile system of communication for comics artists with visual disabilities. His work has been written about in Hyperallergic, New York Magazine, World Literature Today, Wired, Le Monde, The Comics Journal, du9, 50watts and Kenneth Goldsmith's Wasting Time on the Internet and his works are also part of the Ubuweb online contemporary art archive. He is the director of Futures of Comics, an international research program that explores how comics are undergoing historic mutations in the midst of increasingly financialized, globalized technological affordances and proposes to map the social, economic, racial and gendered forces that shape the industry's commercial, communication and production routines. It took place in 2019 during the Fumetto Comics Festival. He was the curator of the Festival Shadow Libraries: Ubuweb in Athens, that proposed to examine the uses of the archive in regards to artistic production and explore the conceptual consistency and the ethics of digital preservation and distribution in web libraries, through the lens of its users and makers. The festival consisted of two symposia, four workshops, an exhibition of media works and a 24h video programme and took place in the Onassis Cultural Centre in March 2018.
order wishlist
published in 2018
no text
24,5 x 35 cm (hardcover)
48 pages (color ill.)
20.00 €
ISBN : 978-2-37751-005-4
EAN : 9782377510054
in stock 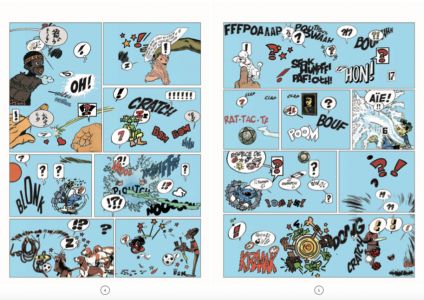 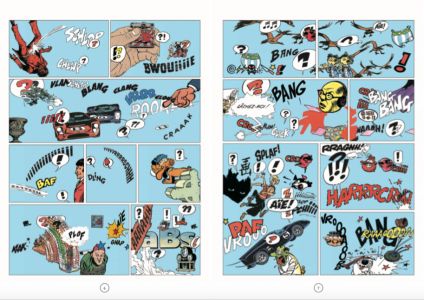 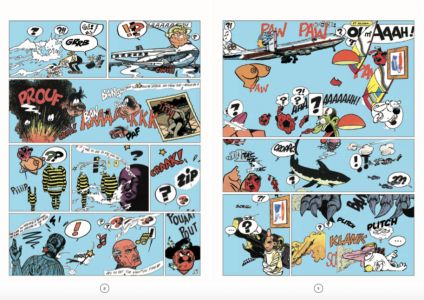