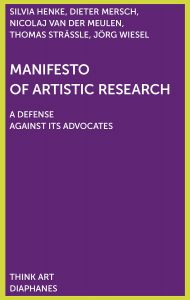 order
wishlist
A manifesto for artistic research and in defense of its autonomy.
Since its beginnings in the 1990s, “artistic research” has become established as a new format in the areas of educational and institutional policy, aesthetics, and art theory. It has now diffused into almost all artistic fields, from installation to experimental formats to contemporary music, literature, dance or performance art. But from its beginnings—under labels like “art and science” or “scienceart” or “artscience” that mention both disciplines in one breath—it has been in competition with academic research, without its own concept of research having been adequately clarified. This manifesto attempts to resolve the problem and to defend the term and the radical potentials of a researching art against those who toy all too carefully with university formats, wishing to ally them with scientific principles. Its aim is to emphasize the autonomy and particular intellectuality of artistic research, without seeking to justify its legitimacy or adopt alien standards.
Dieter Mersch studied mathematics and philosophy in Cologne, Bochum, and Darmstadt. In 2004 he became Professor of Media Theory and Media Studies at the University of Potsdam. Since 2013 he has been Head of the Institute for Theory at the ZHdK Zurich. Dieter Mersch was guest professor in Chicago, Budapest and Lucerne, and Fellow at the IKKM Weimar and at the ZHdK Zurich. His work focuses on media philosophy, aesthetics and art theory, semiotics, hermeneutics, poststructuralism and philosophy of the image and language.
Silvia Henke is Professor of Cultural Theory and Head of the Theory Department at Lucerne University of Applied Sciences and Arts.
Thomas Strässle (born 1972 in Baden, Switzerland, lives and works in Zurich) is Professor of Literature at the University of Zurich and head of the transdisciplinary Y Institute at the University of the Arts Bern.
Jörg Wiesel is co-director and head of Research Department at the Institute for Aesthetic Practice and Theory, FHNW Academy of Art and Design in Basel, Switzerland.
Nicolaj van der Meulen is co-director and head of Studies and Teaching Department at the Institute for Aesthetic Practice and Theory, FHNW Academy of Art and Design in Basel, Switzerland.
order wishlist
published in February 2020
bilingual edition (English / German)
18 x 29 cm (softcover)
96 pages
15.00 €
ISBN : 978-3-0358-0220-7
EAN : 9783035802207
in stock
press releases
Critique d'art, Alban Loosli