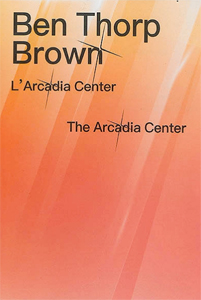 order
wishlist
Part of The New Sanctuary, the Satellite Programme 12 devised by Laura Herman, The Arcadia Center is published in conjunction with the exhibition of work by Ben Thorp Brown, which calls for an architectural experience inspired by ancient mythology and the fields of psychology and neuroscience.
Conceived as a kind of wellness center in response to the politics of our times, The Arcadia Center places architecture at the intersection between empathy, care, and survival. In this arcadian sanctuary, dwellers can enjoy an idyllic, timeless existence that encourages them to reconnect with people, animals, and the natural world. Filmed in Richard and Dion Neutra's VDL Research House II at Silver Lake Reservoir in Los Angeles, the video Cura shown in the exhibition brings to life the principles developed by the Austrian-American architect, who saw architecture as a therapeutic tool and designed projects in which each environmental element was carefully calculated to elicit sensory and emotional responses in people. Featuring a conversation between Ben Thorp Brown and Laura Herman and an essay by architectural theorist Sylvia Lavin, this publication explores empathy as a critical capacity and an expression of our perception of the spaces in which we dwell.
Published on the occasion of the eponymous exhibitions at Jeu de Paume, Paris, from June 18 to September 22, 2019, and CAPC musée d'art contemporain de Bordeaux, from June 20 to September 22, 2019.

Sylvia Lavin is an internationally known critic, historian and theorist whose work explores the limits of architecture across a wide spectrum of historical periods. Lavin is professor of architecture at Princeton University and received her PhD from the Department of Art and Archaeology at Columbia University. Her books include Kissing Architecture (Princeton University Press, 2011), Form Follows Libido: Architecture and Richard Neutra in a Psychoanalytic Culture (MIT Press 2005) and The Flash in the Pan and Other Forms of Architectural Contemporaneity (AA Publications, 2015). Lavin's work as a curator includes the 2013 traveling exhibition Everything Loose Will Land, Art and Architecture in Los Angeles in the 1970s, Exhibition Models at the 2017 Chicago Architecture Biennial, and Architecture Itself and Other Postmodernist Myths, at the Canadian Center for Architecture, Montreal, 2019.
Ben Thorp Brown (born 1983 in New York, lives and works in Brooklyn, NY) attended the Whitney Museum Independent Study Program, and is a graduate of Williams College and the School of the Art Institute of Chicago. His recent work has been presented at the St. Louis Art Museum and in following exhibitions: Dreamlands: Immersive Cinema and Art, 1905-2016 (Whitney Museum, New York), Greater New York (MoMA PS1, New York), 24/7. the human condition (MAK – Austrian Museum of Applied Arts, Vienna Biennale) and Chance Motives (SculptureCenter, New York), as well as in film festivals such as The New York Film Festival and Rotterdam International Film Festival. He has received awards from the Creative Capital and the Graham Foundation, and was an artist in residence at the Chinati Foundation in Marfa, Texas.
order wishlist
Texts by Ben Thorp Brown, Laura Herman, Sylvia Lavin.