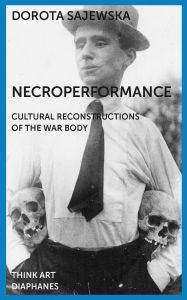 order
wishlist
Dorata Sajewska proposes an innovative perspective for looking back at the formative process of Polish modernity, delving into repressed areas of experience connected with World War I and the ensuing emancipatory movements.
Underpinning modern Polish nationhood, Dorata Sajewska reveals, is not only a Romantic myth of independence but also the up-close horrors of fratricidal warfare and the pacifist aspirations of those confronted with its violence.
Searching for traces of memory in precarious bodies inflicted with the violence of war, Necroperformance implores us to acknowledge the fragility of life as it actively reinforces an attitude of respect for the right to live. Sajewska constructs here an alternative culture archive, conjuring it from compoundly-mediatized historical remnants—bodies, documents, artworks, and cultural writings—that demand to be recognized in non-canonical reflection on our past. Her chief objective is to understand the social impact of remains and their place in culture, and by examining the body and corporality in artistic practices, social and cultural performances, she strives to identify both the fragmentariness of memory and the discontinuity of history, and finally, to reinstate the body's (or its documental remains') historical and political dimension.
Dorota Sajewska is an Assistant Professor of Interart (Eastern Europe) at the University of Zurich and at the Institute of Polish Culture (Section for Theatre and Performance), University of Warsaw. She studied Polish and German Philology at the Warsaw University and Modern German Literature, Theatre Studies and Cultural Communication at the Humboldt University of Berlin. In 2008–2012 she was Deputy Artistic Director of the Dramatic Theatre in Warsaw. She is an author of various publications on theatre and performance, theatre scripts and three monographs.
order wishlist
published in October 2019
English edition
14 x 22,5 cm (softcover)
448 pages
40.00 €
ISBN : 97830358-0191-0
EAN : 9783035801910
in stock
press releases
Critique d'art, Raquel Pereira de Almeida