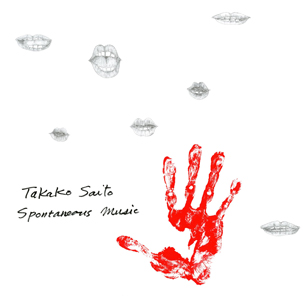 This double LP is released in an edition of 300 and includes two solo vocal pieces—“Tarori Po Po Po” and “Isokono Pasokono”—, two more vocal pieces in which Saito's voice interacts with the sounds of an everyday event—“Toro während des Naturreiskochens” (Toro while cooking brown rice) and “Mit Elektrohammer” (With electric hammer)—, and two non-vocal sound pieces: “Kugeln” (Balls) and “Am Rhein mit Hammer” (At the Rhine with hammer). It is housed in a full-color sleeve and includes one insert with liner notes by Saito, a poster, and four postcards. The sleeve, the poster, and the postcards were designed by Takako Saito specifically for this release and relate to the notion of the music having been created simply with one's mouth and hands.
All recordings have been carefully digitized and mastered by Dirk Specht.
Takako Saito (born 1929) is a Japanese artist closely related with Fluxus. In the 1950s, she participated in the “Creative Art Education” movement where she met later Fluxus fellow Ay-O. In 1963, she moved to New York where she was introduced to George Maciunas and became an important member of the Fluxus movement. She remained part of it throughout the 1960s and 1970s and collaborated with numerous Fluxus artists. Since 1968, Saito has been living mostly in Europe. In 1979, she moved to Germany and now lives in Düsseldorf.
Much of her work revolves around everyday life and everyday things, to which she adds her unique artistic gesture through small but deliberate and carefully crafted interventions. Many of her pieces involve the participation of viewers and only become complete when the audience fills a co-designing role. A sense of playfulness is evident throughout her work, seen in many of her performances and particularly in her various “free” chess games that come in a multitude of different shapes and moreover display a high level of craftsmanship.
In line with her general artistic approach, Saito recorded a number of musical pieces between 1982 and 1992. Retrospectively, she called these recordings “Spontaneous Music” because they involved very simple actions with voice and everyday objects that happened spontaneously. Some recordings have become part of sound pieces in her exhibition “Games” at Emily Harvey Gallery in New York in 1990, but none of them have been released so far. A selection from the recordings is published here for the first time.
Mastering: Dirk Specht.
published in February 2019
31.00 €
currently out of stock