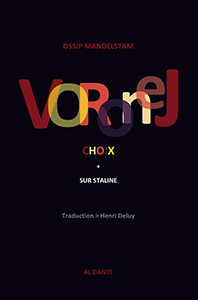 order
This publication presents a vast selection of poems written from 1935-1937 by dissident Soviet poet and essayist Ossip Mandelstam during his forced exile in Voronezh. The edition is completed by two poems on Stalin.
Ossip Emilievitch Mandelstam (1891-1938) is a Russian poet and essayist, one of the leading representatives of acmeism with Anna Akhmatova and Nicolaî Goumilev. Suspected of counter revolutionary activities, he is sentenced to exile and forced labour, from which he will die. Nowadays, Ossip Mandelstam is seen as a major figure in Russian poetry who influenced many poets (Paul Celan, André du Bouchet, Philippe Jacottet…).
order
Translated from the Russian by Henri Deluy.
published in June 2014
French edition
14 x 21 cm (softcover)
96 pages
13.00 €
ISBN : 978-2-84761-770-2
EAN : 9782847617702
in stock