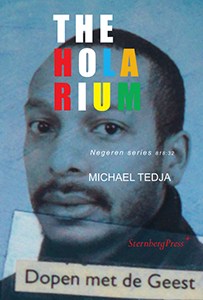 order
This voluminous publication gathers 818 drawings by Dutch artist Michael Tedja, along with a series of commissioned texts by critics and curators. It highlights Tedja's practice as hypersubjective and all-encompassing, as well as predicated on studying the circulation and recycling of images.
Unlike a number of artists who have begun to use negation, detachment, and inaccessibility as tools to reflect upon and problematize the narratives mapped onto them as members of diasporic or immigrant communities, Michael Tedja plays the other extreme. His work seems to exceed and absorb the institutions that attempt to codify him one way or another, like self-proliferating grey goo. Whereas his peers may seek to transcend identity as such, Tedja's practice is hypersubjective and all-encompassing.
The present publication assembles a series of drawings; 818 to be exact, divided in 32 chapters. How can we navigate through them, how can we deal with both the whole and the details? Or as Tedja writes in The Holarium: “Why do we need a specific connection in order to see things as separate from one another? Can a thing ever be unconnected? Is the human eye even able to see the things around it as separate from each other?”
Tedja's art is predicated on studying the circulation and recycling of images. He is constantly introducing images in new contexts, exposing and manipulating their mutability. A specific approach of this kind, built up thematically into an oeuvre, is a new phenomenon. Tedja's oeuvre, drawing on such disciplines as draftmanship, painting, literature, and installations to produce a cohesive whole, has generated a visual language that contributes to the development of art in context of globalization.
Born 1971 in Rotterdam, Michael Tedja lives and works in Amsterdam.
order
Contributions by Jelle Bouwhuis, Krist Gruijthuijsen, Carl Haarnack, Edwin Jacobs, Frank Lubbers, Gean Moreno, Domeniek Ruyters, Janwillem Schrofer.
published in November 2017
English edition
17 x 24 cm (hardcover)
1076 pages (879 color ill.)
37.00 €
ISBN : 978-3-95679-313-4
EAN : 9783956793134
in stock