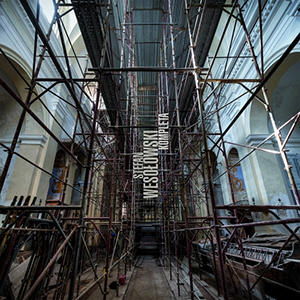 order
Reissue of the first album recorded by the Polish composer in 2008 at the age of 21: a work composed to breviary prayers and hymns for two voices (vocalist Maja Sieminska and Wesołowski himself), string quartet and electronics.
Also available on vinyl.
Stefan Wesołowski (born 1985) is a Polish composer, producer and violinist whose work oscillates between sacred, contemporary and electronic music. He first studied music in his native country, at the academy of Gdansk, then in Villecroze in France. Stefan Wesołowski already has a long career—several albums, collaborations, contributions and awards—and is supported by numerous labels, including Gusstaff, Ghostly International, Miasmah, Important, Ici d'ailleurs, and by Mute Song Publishing.
order
Photographs by Francis Meslet.
published in May 2015
CD Digisleeve
9 tracks
12.00 €
in stock