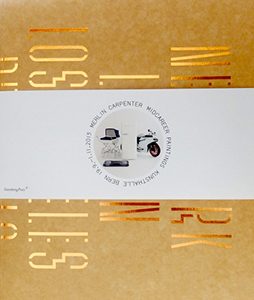 order
wishlist
Merlin Carpenter investigates the status of the midcareer artist with a conceptual project involving the exhibition of transit blankets. The publication documents these works and related gallery shows, in addition with texts by Kunsthalle Bern director Valérie Knoll and artist Sam Lewitt.
Merlin Carpenter's 2015 exhibition “Midcareer Paintings” filled the Kunsthalle Bern's seven rooms with twenty-two transit blankets hung on the wall, pulled like canvas around identically scaled stretcher frames. The transit blankets are the kind used to pack fragile goods. Inexpensive and disposable, they are manufactured from recycled materials, compressed into an insulating sheet used to preserve prized surfaces and materials more valuable than themselves. Each work in the show was post-dated to 2016, despite the exhibition's opening date in September of the previous year. The works were titled after one of the Shepperton-based artist's seven galleries, and were prominently displayed as “not for sale.”
The transit-blanket works are documented in the second half of this publication, the cover of which is embossed with each location of Carpenter's seven galleries—New York, London, Los Angeles, Brussels, Berlin, Miami, Lisboa/Porto. The first half is composed of a black-and-white image feed, resembling collaged photocopies, of photos of the show's installation, related gallery shows, and billboards advertising the show that displayed classic mid-to-late century consumer goods.
In addition, texts by Kunsthalle Bern director Valérie Knoll and artist Sam Lewitt examine the materiality of Carpenter's works, the particular mix of playfulness and earnestness in his artistic output, and how the “paintings” thematize the limbo of the “midcareer” artist as well as the circulation of the artwork as a commodity that signifies material wealth or value.
Published following the eponymous exhibition at Kunsthalle Bern, from September 19 to November 1st, 2015.
Born 1967 in Pembury (UK), Merlin Carpenter lives and works in London.
order wishlist
Texts by Valérie Knoll and Sam Lewitt