Tell Them I Said No 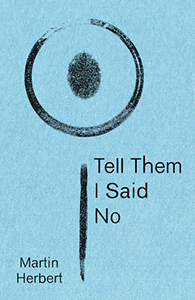 order
This collection of essays by Martin Herbert considers various artists who have withdrawn from the art world or adopted an antagonistic position toward its mechanisms (essays on Lutz Bacher, Stanley Brouwn, Christopher D'Arcangelo, Trisha Donnelly, David Hammons, Agnes Martin, Cady Noland, Laurie Parsons, Charlotte Posenenske, and Albert York).
A large part of the artist's role in today's professionalized art system is being present. Providing a counterargument to this concept of self-marketing, Herbert examines the nature of retreat, whether in protest, as a deliberate conceptual act, or out of necessity. By illuminating these motives, Tell Them I Said No offers a unique perspective on where and how the needs of the artist and the needs of the art world diverge.
Martin Herbert is a writer and critic living in Tunbridge Wells, UK, and Berlin. He is associate editor of ArtReview and a regular contributor to Artforum, frieze, and Art Monthly, and has lectured in art schools internationally. His monograph Mark Wallinger, a comprehensive study of the British artist's career, was published in 2011.
order
published in January 2017
English edition
12,8 x 19,7 cm (softcover)
128 pages (25 b/w ill.)
18.00 €
ISBN : 978-3-95679-200-7
EAN : 9783956792007
in stock

Tell Them I Said No