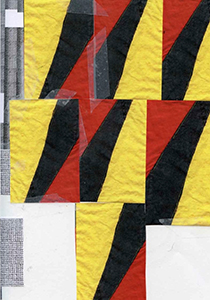 order
wishlist
The first-ever monograph dedicated to the artist focuses on a project based on a research into the Portuguese railways, and also refers to a number of previous projects selected or especially created by Carla Filipe.
Limited edition of 500 copies.

Published following Carla Filipe's show “Da cauda à cabeça” at Museu Coleção Berardo, Lisbon, from January 29 to May 4, 2014.
The work of Carla Filipe (born 1973, Portugal, lives and works in Porto) operates in an area where the boundaries between so-called high culture and popular culture are inevitably merging. Far removed from the convenient formalism that runs through a significant portion of contemporary creation, she has developed an activity anchored in drawing—where her visually and conceptually robust projects are underpinned by various types of reminiscences. Whether involving works that revisit her family's past, or inquiries related to Portugal, as well as political and social idiosyncrasies. Although Carla Filipe also works directly with three-dimensional works and space, her most familiar terrain, as stated above, is drawing—which she mixes together with writing in a kind of uninterrupted streams of consciousness. One of the factors that underlines the effectiveness of this modus operandi derives precisely from this procedural dimension, wherein the subjects and respective artistic treatment collapse into their own distinctive dimension, which we may designate as—archaeology of the present.
order wishlist
Edited by Nuno Ferreira de Carvalho, Carla Filipe, Gonçalo Sena.
Texts by Vít Havránek, Pedro Lapa, Pedro G. Romero, interview with Carla Filipe by Stephan Dillemuth.