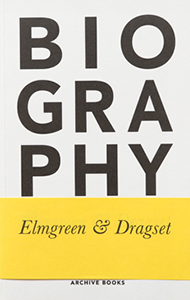 order
A collection of texts in which a number of art historians and other professionals reflect on the artists' practice.
“Biography” is the first major exhibition in Oslo by Elmgreen & Dragset. The show presents a wide selection of works from the artist duo's complex universe, including sculpture, performance and interactive installations. Works from the late 1990s onwards are shown together with recent projects, and all together they creates a unique insight into the artists' oeuvre. Elmgreen & Dragset consider an exhibition to be a work of art in itself, with all its narrative, choreographic and social possibilities and “Biography” will examine the very conditions of exhibiting. Works that initially arrived from very different contexts are here brought together and the new constellations of works generate altered readings and additional layers of meaning. When walking through the museum, one will experience environments which occur very realistic, just in order to end up in almost surreal and other worldly scenarios elsewhere in the exhibition. A durational live act is juxtaposed with a series of wall pieces, and existing sculptures find their place in the context of new site specific environments. Part of the museum's main exhibition hall is transformed into a gay nightclub, where the public encounter the remnants of a party, witnessing an activity going on prior to the opening of the exhibition. Additionally, areas of the museum that are not normally used as exhibition spaces are included in Elmgreen & Dragset's staging. Already in the museum's cloakroom, the surprising elements that have been added to the existing architectural features will prepare the visitor for an exhibition that is also an immersive theatrical / filmic experience.
Published following the touring exhibition “Biography” at the Astrup Fearnley Museet, Oslo, the National Gallery of Denmark, Copenhagen, and at the Tel Aviv Museum of Art in 2014 and 2016.
Throughout their career, Michael Elmgreen et Ingar Dragset (born respectively in 1961 and 1969 in Denmark and Norway) have redefined the way in which art is presented and experienced. Drawing from disciplines as divergent as institutional critique, social politics, performance and architecture, in their sculptures and installations the artists reconfigure the familiar with characteristic wit and subversive humour. From the transformation of New York City's Bohen Foundation into a 13th Street Subway Station in 2004, to the siting of a Prada boutique in a Texan desert in 2005, and the insertion of institutional spaces within the architecture of a public gallery, as in the Serpentine Gallery's critically acclaimed “The Welfare Show” in 2006, their work raises issues around social models and social spaces, and prompts a re-thinking of the status quo.
order
Edited by Gunnar B. Kvaran and Kjersti Solbakken.
Texts by Andrew Berardini, Iwona Blazwick, Susanne Christensen, Ruth Direktor, Bruce Willis Ferguson, Massimiliano Gioni, Martin Herbert, Shannon Jackson, Gunnar B. Kvaran, Quinn Latimer, Hans Ulrich Obrist, Marianne Torp.