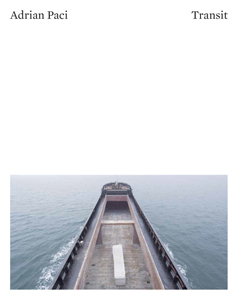 order
wishlist
Reference monograph.
Published on the occasion of the exhibition “Adrian Paci – Lives in Transit” at the Jeu de Paume, Paris, the PAC Padiglione d'Arte Contemporanea, Milan, and the Musée d'art contemporain de Montréal, in 2013-2014.
The work of Adrian Paci (born 1969 in Albania, lives and works in Milan) underlines one of the paradoxes of human intelligence, which consists of becoming aware of reality through unreality. Often inspired by subjects close to him and stories arising from his everyday life, Adrian Paci lets them slide poetically towards a fiction, which in its turn creates wider realities.
In 1997, Adrian Paci escaped violent riots in Albania to take refuge, with his family, in Italy. On his arrival in the country, he temporarily abandoned painting and sculpture in favor of video, thus exploring new cinematic languages. His experience of exile, the shock of separation and adaptation to a new place defined the context of his first videos, through which he attempted to discover the roots of his past.
Gradually, Adrian Paci has distanced himself from his personal experience to treat collective history, in projects that emphasize the consequences of conflicts and social revolutions, revealing how identity is conditioned by the socio-economic context. Working with non-professional actors, men and women in difficulty, he explores many of the existential and social issues of our times, such as migration, loss, displacement, globalization, nostalgia and memory.
After representing Albania at the Venice Biennale in 1999 and exhibiting at MoMa PS1 in New York in 2005, Adrian Paci has been the subject of many solo exhibitions: Moderna Museet in Stockholm, Kunstverein in Hanover, Tel Aviv contemporary art centre, Bloomberg Space in London and Kunsthaus Zurich. He has been featured in numerous group shows, including at the Tate Modern, London (2008) and Maxxi, Rome (2011). He has taken part in Manifesta 3 in Ljubljana (2000), Venice Biennale (2005), Lyon Biennial and Havana Biennial (2011).
order wishlist
Texts by Adam Budak, Eric de Chassey, Emanuela De Cecco, Edna Moshenson, Edi Muka; interview between the artist; l'artiste avec Marta Gili et Marie Fraser.