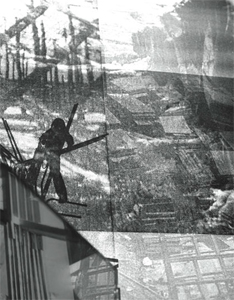 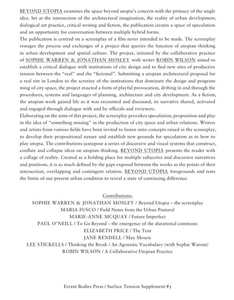 order
wishlist
Based on a project initiated by the collaborative practice of Sophie Warren and Jonathan Mosley with writer Robin Wilson, Beyond Utopia queries the function of utopian thinking in urban planning and spatial culture.
The aim of the original project was to establish a critical dialogue with institutions of city design and to find new sites of productive tension between the “real” and the “fictional”. Submitting a utopian architectural proposal for a real site in London to the scrutiny of the institutions that dominate the design and programming of city space, the project enacted a form of playful provocation, drifting in and though the procedures, systems and languages of planning, architecture and city development. As a fiction, the utopian work gained life as it was recounted and discussed, its narrative shared, activated and engaged through dialogue with and by planning officials and reviewers.
Elaborating on the project, the publication Beyond Utopia aims to further provoke speculation, proposition and play, outlining the idea of “something missing” in the production of city space and urban relations. Including a screenplay produced by the artists, which restages the process and exchanges of the original proposal, the publication queries how we might actively resist restrictive canons of standardization to produce a specific sociability and emergent environment built collectively, spontaneously and in support.
Writers from various fields have been invited to fasten onto concepts raised in the screenplay, to develop their propositional nature and establish new grounds for speculation as to how to play utopia. The contributions both critique and contextualize utopian thinking, ultimately locating utopia as a critical tool with which to speculate and reveal the limits of our present urban condition and its systems.
The contributors include Maria Fusco (writer and Director of Art Writing at Goldsmiths, London), Marie-Anne McQuay (curator), Paul O'Neill (curator, artist and writer), Elizabeth Price (artist), Jane Rendell (writer and Director of Architectural Research at the Bartlett, London), Lee Stickells (senior lecturer and researcher of architecture, University of Sydney), Robin Wilson (writer on architecture, art and landscape).
Following the publication of Surface Tension: Problematics of Site in 2003, Surface Tension appears regularly as a series of published Supplements (launched 2006) that continues the artistic and philosophical program initiated in the original anthology. The series addresses questions of site-specific art, public and architectural space, and location-based practices, supporting investigations onto public practices through writing, documentation, and field work, while questioning what role such practices can offer in defining contemporary culture.
Sophie Warren is an artist and Jonathan Mosley is an architect. They have a critical spatial practice that employs strategies of play, hybridisation and the construction of imaginary architectures to resist homogeneous perceptions of urban space. Using language, event, still and moving imagery and installation Warren & Mosley construct situations, an informal architecture of possibility, moving between material fact and the fiction of the imagination. The practice infiltrates environments of the multi-use sports hall, the car park, the motorway service station, the construction site and the offices and corridors of the institutions that build our cities.
Their work has been exhibited internationally including the Showroom, London (2010) with Rogue Game an ongoing series of hybrid games in collaboration with Can Altay, Berlin 60th and 58th International Film Festivals (2010 and 2008), Sydney International Architecture Film Festival (2010), Crosstalk Video Festival, Budapest (2010), within Coalesce: Happenstance curated by Paul O'Neill at Smart Project Space, Amsterdam (2009), ITU Gallery, Istanbul (2008), Gymruy International Biennale, Armenia (2004), Centre of Contemporary Art, Glasgow (2003), The Armory Show, New York (2002), Frederike Taylor Gallery, New York (2001) and Gasworks, London (2000). Reviewed in the art and architectural press, the work of the collaboration has also been discussed in Jane Rendell (ed.) Critical Architecture (London: Routledge, 2007) and Brandon LaBelle (ed.) Surface Tension Supplement No.1 (Los Angeles and Berlin: Errant Bodies Press, 2006).
order wishlist
Edited by Sophie Warren and Jonathan Mosley.
Contributions by Maria Fusco, Marie-Anne McQuay, Paul O'Neill, Elizabeth Price, Jane Rendell, Lee Stickells, Robin Wilson.
published in July 2012
English edition
18,5 x 24 cm (softcover)
126 pages (b/w ill.)
19.00 €
ISBN : 978-0-9827439-3-5
EAN : 9780982743935
in stock