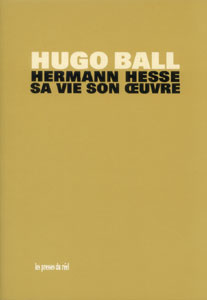 order
wishlist
Published in 1927 for occasion of the 50th anniversary of the death of Hermann Hesse, this biography is one of the best exposés of his spiritual journeys. For Ball (founder of the Cabaret Voltaire and Zurich Dada), Hesse represents the ultimate of German romantic heritage, being at the crossroad of various currents : Swaben pietism, Hindou spirituality and psychoanalysis. In this work, Ball also touches on fundamental themes of his own work : another history of poetry, another history of thought, another history of western sources of spirituality. From 1920 until his death in 1927, Ball, like Hesse, emigrated to the Tessin where the two continued a fervent friendship, delving incessantly into profound issues of 20th century thinking.
Hugo Ball was born 22 February 1886 in Pirmasens, Germany, died 14 September 1927 in San Abbondio, Switzerland. He was the founder of Cabaret Voltaire and Zurich Dada.
order wishlist
Translated from the German by Sabine Wolf.
published in 2000
French edition
17 x 24 cm (softcover)
192 pages
14.00 €
ISBN : 978-2-84066-046-0
EAN : 9782840660460
in stock