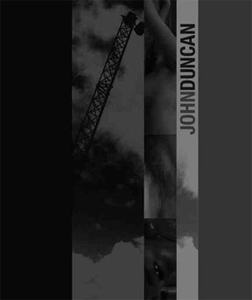 Monograph with selected artworks, audio, installations and performances from John Duncan's periods of work in Los Angeles, Tokyo, Amsterdam and Scrutto di San Leonardo, Italy. Descriptions of Duncan's most significant events, illustrated with photos and drawings, many of which will be published for the first time. Includes many articles, and a CD of Duncan's audio work, with tracks that highlight each location as well as testify to the overall development of his music.
Over the last 25 years John Duncan (born in the United States, currently lives and works in Italy) has defined himself as an artist through unceasingly engaging and often challenging projects. From his days in Los Angeles working within the performance cultures of the late-70s, to periods spent in Japan and Amsterdam working with experimental sound, film, and radio, to his current residence in Italy, Duncan's practice has matured into multi-media installations and performances. Investigative and probing, the artist's works have been continually at the forefront of experimental cultures gravitating around noise music, and lend greatly to defining in what way sound may speak toward extreme physical experience while rendering often surprisingly beautiful depictions. As the contributions to this monograph testify, Duncan's art has the ability to enthral and terrify. Spanning his career, John Duncan documents many important projects, seeking to represent through a critical and intimate portrait of the artist his uncompromising work.
Duncan's audio releases The Crackling (1996 with Max Springer), Tap Internal (2000), Palace of Mind (2001 with Giuliana Stefani), Fresh (2002 with Zeitkratzer), Infrasound-Tidal (2003) and The Keening Towers (2003) are all considered by critics and composers alike to be benchmarks in the field of experimental music. His events and installations have recently been held at MUTEK in Montreal, The Compound in San Francisco, Teatro Piccolo Jovinelli in Rome, the NorrlandsOperan in Umeå, Fylkingen in Stockholm, the Watari Museum of Art in Tokyo, Galleria Nicola Fornello in Prato, the 2003 Gothenburg Biennial, and Quarter in Florence. His work in performance has been shown at the Museum of Contemporary Art (MOCA), Los Angeles; the Osterreichisches Museum für Angewandte Kunst (MAK), Vienna; Museu d'Arte Contemporani, Barcelona (MACBA); and Museum of Tokyo (MOT).
Texts by Daniela Cascella, Leif Elggren, Cosey Fanni-Tutti, Carl Michael von Hausswolff, Mike Kelley, Brandon LaBelle, Paul McCarthy, Tom Recchion, Takuya Sakaguchi, Giuliana Stefani.
published in 2006
English edition
21,2 x 25 cm (softcover)
104 pages (b/w ill.)
ISBN : 978-0-9772594-2-7
EAN : 9780977259427
sold out