Jacques Halbert painted his first cherry in 1975. This subject has strongly informed his prolific work, either as a repeated motif or a randomly placed against the blue surface of his paintings. The image of the cherry, to which he lays artistic claim, was to lead the artist into painting as performance art, from France to the US, participating in the Fluxus movement as well as Eat Art. Despite exploring so many creative paths in such a variety of mediums, Halbert remains profoundly attached to painting. He also visits other culinary subjects such as peas, potatoes or gratinated paintings, but the cherry is the single image which has continuously endured throughout his more than fourty-year career. 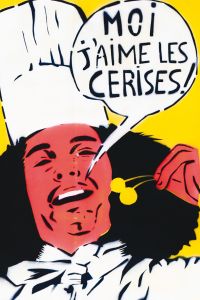 Autoportrait
2021
French edition
varia
A number of more or less benevolent considerations on the work of Jacques Halbert.