Vera Lehndorff (born 1939 in Kaliningrad, Russia, lives and works in Berlin) studied painting and design at the Fachschule für Gestaltung in Hamburg from 1958 to 1961. In 1961 she moved to Florence. Lehndorff's modeling career began there. She made her international breakthrough in 1966 in Michelangelo Antonioni's cult film Blow-up, after which Veruschka, as she came to be known professionally, became a 1960s fashion icon. During the 1968 shoot in Rome for Franco Rubartelli's film Veruschka, poesia di una donna (1971), she experimented with body-painting, progressively transforming her appearance in her own artworks as well as in collaboration with Holger Trülzsch, whom she met in 1969. 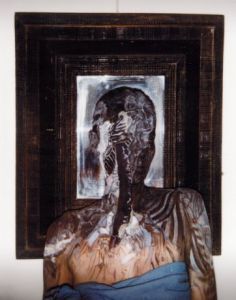 Vera Lehndorff, Holger Trülzsch
Body of Work – Behind the Appearances
2022
English edition
Edition Patrick Frey
forthcoming
Combining archive material with a wide selection of photographs of body paintings produced by the duo in the 1970-1980s, this publication retraces the evolution of gender identities and the treatment of the female body in visual culture from the 1950s to the present.