Archive Matter – A Camera in the Laboratory of the Modern 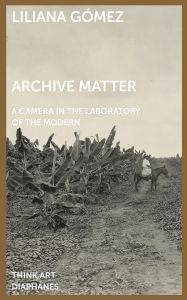 pre-order
wishlist
The photographic archive of a former U.S. banana company as a vehicle for the expansion of corporate capitalism in the Caribbean.
The establishment of the United Fruit Company as a global political agent with its banana plantations met with considerable resistance. The Company's resurgent photographic archive is at the center of this book's considerations on the historical and political agency of photography as a field. By exploring a set of practices, institutions and relationships, as well as the aesthetic and epistemic contexts of the images in botany, archaeology and tropical medicine, this book argues that the overlooked but important photographic archive made the expansion of corporate capitalism into the Caribbean possible. "Since photographic archives tend to suspend meaning and use; within the archive meaning exists in a state that is both residual and potential," Allan Sekula maintains.
Reading the photographic archive against the grain, this book examines the images from within their "optical unconscious" and via the archive's silences and omissions; as residues they attest to the (in)visibility of the violence of the radical man-made environmental alterations and its cultural implications. The archive's powerful imaginaries, envisaged as a chronotope of the eternal transition towards modernity, a promise of modernization itself, have effectively brought the Caribbean into modernity. Yet, the aftermath of the photographs helps scrutinize this modernity and recognize the violence embodied as the foundational act of the archive.
Liliana Gómez is SNSF-professor (Swiss National Science Foundation) at the Institute of Art History at the University of Zurich, where she directs the research project Contested Amnesia and Dissonant Narratives in the Global South. Post-Conflict in Literature, Art, and Emergent Archives. She edited Performing Human Rights. Contested Amnesia and Aesthetic Practices in the Global South (Diaphanes, 2021) and co-edited with Lisa Blackmore Liquid Ecologies in Latin American and Caribbean Art (Routledge, 2020). She is the author of Lo urbano. Teorías culturales y políticas de la ciudad en América Latina (Pittsburgh, 2014).
pre-order wishlist
2022 (publication expected by 4th quarter)
English edition
14,8 x 22,5 cm (softcover)
416 pages (ill.)
45.00 €
ISBN : 978-3-0358-0396-9
EAN : 9783035803969
forthcoming