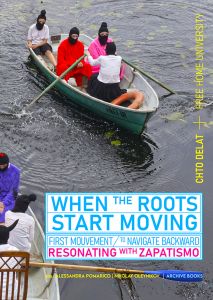 order
wishlist
To Navigate Backward: Resonating with Zapatismo a book-within-a-book, the first of three mouvements (as in a musical composition) is a collection of essays titled When the Roots Start Moving: Chto Delat and Free Home University—investigating predicaments of rootedness and rootlessness and notions of belonging and of displacement across different geographical and epistemological coordinates.
Zapatismo—the insurgent movement of Indigenous peoples from Mexico—emerges as a form of belonging, a home (or a homecoming) for our hopes and political imaginaries, providing a praxis to learn from and with. The contributors of this book, without romanticizing or objectifying the Zapatista struggle toward Autonomy, offer their understanding of the Zapatistas' movement, of their poetics and politics within an Indigenous cosmovision and cosmopolitics, but also in relation with the current global ecological and social crises.
The book extend the research and practice of artistic collective Chto Delat, long since adopting Zapatismo as a lens to self-reflect and emblematically reminding of how the Zapatista imaginary continues to inspire those who are looking for emancipatory tools: through art, language, radical pedagogy and conviviality, as a practice of commoning and collectively reimagining an otherwise.
To Navigate Backward: Resonating with Zapatismo is a small act of reciprocity—in preparation for the Zapatistas' visit to the European continent, a gesture of solidarity with those who, with fierce care, leave their homes to reverse imposed trajectories, to look in the same direction and share a common horizon.
The conversation hosted in this book by Free Home University will continue in the following two mouvements—Between Displacement and Belonging and Motherlands/Mother Earth.
The collective Chto Delat (What is to be done?) was founded in early 2003 in St. Petersburg by a workgroup of artists, critics, philosophers, and writers from St. Petersburg, Moscow, and Nizhny Novgorod with the goal of merging political theory, art, and activism. Chto Delat sees itself as an artistic cell and also as a community organizer for a variety of cultural activities intent on politicizing "knowledge production". The activity of collective takes responsibility for a postsocialist condition and actualization of forgetten and repressed potentiality of Soviet past and often works as a politics of commemoration. From its inception, the collective has been publishing an English-Russian newspaper focused on the urgent issues of Russian cultural politics, in dialogue with the international context. In 2013, Chto Delat initiated an educational platform—School of Engaged Art in Petersburg and also provides resources for a space called Rosa's House of Culture.
Free Home University exists at the crossroad of engaged art, experimental pedagogy, and political commitment since 2014. Based in Lecce (Italy), FHU has been carrying out artistic investigations and processes of convivial research, engaging with communities of struggle and practice. Artists, farmers, activists, asylum seekers, scholars, thinkers and doers collectively inform learning spaces, through living, studying, and creating together.
order wishlist
published in February 2022
English edition
17 x 24 cm (softcover)
272 pages
22.00 €
ISBN : 978-3-948212-70-4
EAN : 9783948212704
in stock

When the Roots Start Moving

When the Roots Start Moving