Idiocracy – The Culture of the New Idiot 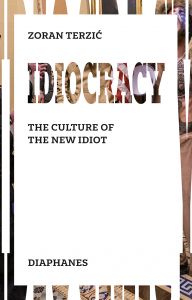 pre-order
wishlist
Zoran Terzić's wide-ranging and sharply detailed essay takes up the cultural-historical figure of the idiot and follows its numerous appearances throughout intellectual history in an examination of the art of idiocy that extends outside the hypertrophic present.
Beyond the universal story of human incapability, there is a new quality of idiocy today. While the old idiot derived knowledge from isolation, the new idiot refuses all understanding of the world. He appears merely as the figure of a systematic incompetence that is impacting even the furthest reaches of political and media life, giving rise to new, often utterly absurd competences.
Current debates about “fake news” or the “postfactual society” can be read from this perspective as evidence of a broad transformation of the forms of self-politics, in which the absurd is redefining the image of reality. For although there is much talk about global consciousness and community, the solipsism of the idiotic subject seems to be operating all the more effectively in the background. As the isolated self of the many, it forms the empty center of a planetary idiocy revolving around itself.
Born 1969 in Banja Luka, Zoran Terzić studied sociology, jazz piano, and communication design in Nuremberg and Wuppertal, and visual art in New York, following which he devoted himself to writing. PhD in 2006. He has lived in Berlin since 2001.
pre-order wishlist
Translated from the German by Michael Turnbull.
2022 (publication expected by 4th quarter)
English edition
13,5 x 21 cm (softcover)
192 pages
20.00 €
ISBN : 978-3-03580-367-9
EAN : 9783035803679
forthcoming