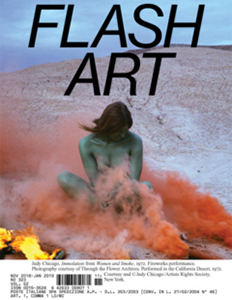 wishlist
Special feature on Judy Chicago (with contributions by Géraldine Gourbe, Viki D. Thompson Wylder, William J. Simmons, Stephanie Seidel); Thomas Duncan on the work of Antek Walczak; Agnieszka Gratza interviews Tania Brugera on “10,142,926”; Tiana Reid on landscape and the figural in the sculptures of Tau Lewis; Kerstin Stakemeier on Amy Sillman's new paintings; Fanta Sylla speaks to artist and filmmaker Cauleen Smith; exhibitions reviews.
Bodily figuration features prominently in this issue of Flash Art, which includes Judy Chicago's Immolation (1972) from her “Women and Smoke” series (1968–74) on its cover. The work counts among those Chicago made before taking up the central core imagery that constitutes her landmark 1974–79 work The Dinner Party, with which she is often narrowly identified. On the occasion of “Judy Chicago: A Reckoning,” a major survey opening at the Institute of Contemporary Art, Miami, this December, Flash Art invited Géraldine Gourbe, Viki D. Thompson Wylder, William J. Simmons, and Stephanie Seidel to reflect on Chicago's practice and legacy. This special dossier seeks to supplement the artist's popular recognition with a plurality of critical voices.
This issue also features an essay by Thomas Duncan on the work of Antek Walczak, who writes that the artist “clearly exploits painting as a means of working through technological systems, social networks, and the omnipresent forces of capitalism,” while also appearing “distrustful of painting's ability to properly channel these ideas outside the realm of art.”
Flash Art is an international quarterly magazine and publishing platform dedicated to thinking about contemporary art, exploring the evolving cultural landscape through the work of leading artists, writers, curators and others. One of Europe's oldest art magazines, Flash Art was founded in Rome in 1967, before relocating to Milan in 1971, and was originally bilingual, published in both Italian and English. In 1978 two separate editions were launched: Flash Art International and Flash Art Italia. Today the magazine remains one of the most recognizable and widely read publications of its kind, and is distributed in 87 countries.
wishlist
published in November 2018
English edition
22,5 x 29 cm (softcover)
132 pages (color & b/w ill.)
sold out
table of contents