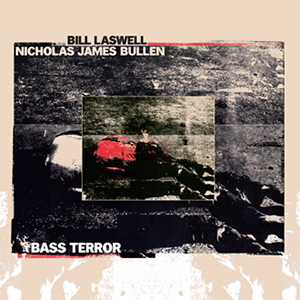 order
wishlist
Limited edition of a recording confronting the virtuosity of two bassists: Bill Laswell's black trance track Bass Terror Tetragrammaton faces Nik Bullen's hypnotic composition Nocturnal Crawl. The two pieces answer each other strangely, like two sides of the same hidden anxiety.
The concept of this series was the confrontation of electric guitars as the tutelary instrument, but here and this time only, it came out of bassists confronting each other. Never released before as LP vinyl. Available here as a 400 copies limited red vinyl. This recording is the dark side of Bill Laswell at the peak of his art in 1995. He goes into a black trance. The piece is not from a collaboration, it was designed alone, in his studio in Brooklyn. Bass Terror Tetragrammaton is also to be linked to an alchemical process.
Nocturnal Crawl is a totally hypnotic piece, the first that Nik Bullen designed outside of Napalm Death and Scorn.
Nicholas James Bullen (born 1968 in Coventry, England, lives and works in Birmingham) is a British composer and multi-instrumentalist, member of music bands Napalm Death and Scorn.
Over the course of some three decades, visionary bassist-producer Bill Laswell (born 1955 in Salem, Illinois) has been one of the most prolific and restlessly creative forces in contemporary music. A sound conceptualist who has always been a step ahead of the curve, he has put his inimitable stamp on nearly 3,000 recording projects by such artists as Mick Jagger, Yoko Ono, Iggy Pop, Laurie Anderson, Brian Eno, Bootsy Collins, Nine Inch Nails, Motorhead, Peter Gabriel, Blur, les Ramones, George Clinton, Pharaoh Sanders, le Dalaï Lama, Matisyahu, Angelique Kidjo, DJ Krush, RAMM:ΣLL:ZΣΣ, Sting, The Last Poets, Afrika Bambaataa, PiL, Julian Schnabel, Whitney Houston, Manu Dibango, Fela Kuti, Herbie Hancock, William Burroughs…
order wishlist
published in September 2018
red vinyl LP
2 tracks (15'11 / 18'35)
16.00 €
in stock