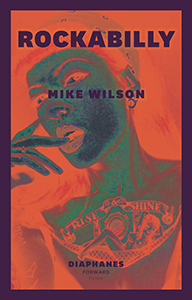 order
wishlist
After a meteorite crashes into his yard, the daily life of Rockabilly and of his neighbors takes a strange turn… Mike Wilson's third novel combines social criticism and science fiction, depicting the dark corners of American suburbs at night.
Mike Wilson leads us on a hair-raising journey into the high-color American night. A meteor crashes into greaser Rockabilly's backyard, setting off a ripple of strange events. The tattoo of a pin-up girl on his back comes to life and begins to exert her murderous control over the suburb. His precocious teenage neighbour Suicide Girl who likes to longingly spy on him from her bedroom window starts lactating. Get the breast pump. And the cigarettes. Now her pet lizard has gone missing. Meanwhile, an invalid with a condition called “facial cranial infantilism” begins to act like the disturbed man everyone expects him to be, pacing the block to quiet his unseemly thoughts. The only one whose head is on straight tonight seems to be Bones, the neighbourhood dog. The tattoo enables him to think human thoughts, to begin to hatch a plan.
With economic language and well-crafted pacing, Wilson's novel artfully brings the archetypes of the suburban American underbelly together in complex ways. Reflections on the body, mind, and roles in society are silhouetted against the garish light of the Wal-Mart sign.
The meteorite must be buried in here somewhere—it's time to start digging.
Mike Wilson (born 1974 in St. Louis, Missouri, lives and works in Santiago de Chile) is an Argentine-American writer. He teaches literature and philosophy at the Universidad Católica in Santiago de Chile and is the author of several books.
order wishlist
Translated from the Spanish by Jordan Lee Schnee (original title: Rockabilly, Alfaguara, 2011).
published in June 2018
English edition
12 x 18,5 cm (softcover)
84 pages
15.00 €
ISBN : 978-3-03580-097-5
EAN : 9783035800975
in stock