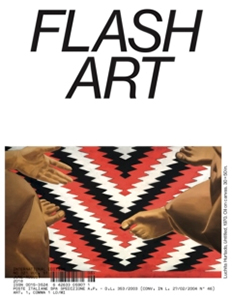 order
wishlist
The articles and interviews included in this issue of Flash Art address the human body, introducing artistic practices that push the body's physical boundaries and challenge its codified representations. With Luchita Hurtado; special feature on artist, educator, curator, and cultural theorist Ian White; Lena Henke; Martti Kalliala on the transformational experience of Burning Man; Eric N. Mack; Stefano Sollima; Bruce Nauman by Isabelle Graw (on Flash Art March-April 1993); exhibitions reviews.
In the paintings of Venezuelan-born, California-based Luchita Hurtado, this issue's cover artist, the body becomes a landscape or is self-portrayed from the artist's own perspective, with no mirrors or cameras to aid her, as a way to connect the personal with the contextual. “[Hurtado's] body multiplies and moves from confined domestic spaces into public, wide-open spaces, acting as a sincere pre-selfie browser that brings its vulnerability with it everywhere,” writes Catherine Wagley in her article on the artist.
Also contained in this issue is a twelve-page dossier dedicated to artist, educator, curator, and cultural theorist Ian White, who died of cancer in 2013 at the age of forty-two. Compiled on the occasion of the Camden Arts Centre's current overview of White's output, the dossier reconsiders White's critical strategies, all of which engage the body as a site of inquiry for examining the historical and political conditions for making and presenting art. According to Federico Florian, who along with Emma Hedditch and Matt Wolf contributed to the dossier, White saw “movement in all of its connotations—relating to the performing body, the muscle-mind, and that of the encroaching illness—[as] a constant concern. As if thinking and talking about gestures, about motion, was a way to stay active and critically receptive.”
Flash Art is an international quarterly magazine and publishing platform dedicated to thinking about contemporary art, exploring the evolving cultural landscape through the work of leading artists, writers, curators and others. One of Europe's oldest art magazines, Flash Art was founded in Rome in 1967, before relocating to Milan in 1971, and was originally bilingual, published in both Italian and English. In 1978 two separate editions were launched: Flash Art International and Flash Art Italia. Today the magazine remains one of the most recognizable and widely read publications of its kind, and is distributed in 87 countries.
order wishlist
published in June 2018
English edition
22,5 x 29 cm (softcover)
132 pages (color & b/w ill.)
14.50 €
in stock
table of contents