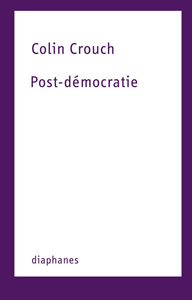 order
Starting from the deep malaise and the violent crisis of confidence in state institutions in modern democracies, this essay analyzes the growing influence and power of the multinational corporations in modern democracies.
Colin Crouch is a British political scientist and sociologist, professor of Governance and Public Management at Warwick Business School. His concept of “post-democracy” represents a major contribution to the current debates on the future of the political system.
order
Translated from the English by Yves Coleman (original title: Post-Democracy, Polity Press, 2004).
published in March 2013
French edition
13,5 x 21 cm (softcover)
144 pages
14.00 €
ISBN : 978-2-88928-003-2
EAN : 9782889280032
in stock