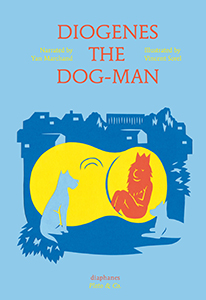 order
wishlist
Diogenes as a dog.
Diogenes not only admires the honesty of dogs, he has actually become one—sleeping, eating, and lifting his leg to pee wherever he chooses! Best of all, unlike humans, who dupe one another as to their true feelings, Diogenes the Dog-Man is free to bark at and even bite his adversaries in the calves—even if they happen to be Alexander the Great. Initially, the citizens gathered in the Agora think Diogenes is mad. But it soon becomes clear that we can all learn a thing or two from dogs about how to live a simple life.
Plato & Co. introduces children—and curious grown-ups—to the lives and work of famous philosophers, from Descartes to Socrates, Einstein, Marx, and Wittgenstein. Each book in the series features an engaging—and often funny—story that presents basic tenets of philosophical thought alongside vibrant color illustrations. Plato & Co.'s clear approach and charming illustrations make this series the perfect addition to any little library.
Yan Marchand is a French writer and philosopher.
Vincent Sorel studied illustration at the École des Arts décoratifs in Strasbourg. He is a contributor to the Comic-Online-Soap Les autres gens, the Fanzine Écarquillettes and the Webmagazine Numo.
order wishlist
Translated from the French by Anna Street (original title: Diogène l'homme chien, Les petits Platons, 2011).
published in May 2017
English edition
14,8 x 21,6 cm (hardcover)
64 pages (64 color ill.)
14.95 €
ISBN : 978-3-03734-933-5
EAN : 9783037349335
in stock