Sounds from the Archipelago – An Introduction to the Lush Indonesian Music Tradition – Vol. 2 (vinyl LP) 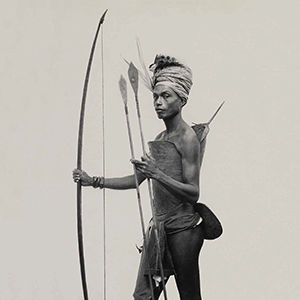 wishlist
This second volume dedicated to traditional music from the Indonesian archipelago covers music from the vast island of Sumatra (West Indonesia), The Moluccas Islands and the island of Bali.
In the first sample from Sumatra (“Gondang Mula Mula”), recorded near the awesome Lake Toba, we find a ceremonial overture played during weddings and special occasions. The band comprise of four instruments: two “Ketchapis” (sort of a two-string ukulele), one “Serenar”(a wind instrument) and one simple metal spoon tapped against a glass bottle.
The second track (“Andung Andung”) is instead music conceived to put people in the right mood for working in the fields, or boating on lake Toba. Some sort of predecessor, if you will, of the “Ayo kerja” slogan and movement.
The third track (“Hasa Hatan”) is some coda to all ceremonies in the region, and carries a benediction.
The track from Moluccas (“Menari Sawat”) is a muslim traditional dance from the area (menari), while sawat is the name of this type of music. The recording is taken in a small fishing village.
We then move to Bali, where the first track (“Pubradaya”) is a sitting dance performed by a local Gamelan Orchestra. The following four tracks (“Barong Dance - Preren/Omang/Castel and Sadewa”) are all part of a suite of drums and gamelan music performed for the dance of a Barong, which is a mythical creature represented as half lion and half dog. Statues of barong are everywhere in Bali, typically near the gates or the entrance to palaces, temples (“pura”) or important places and landmarks.
The last two pieces are typical Cremation Music played on the Tower at the Cremation Ceremonies in Bali, extremely interesting and unique. In the first of the two samples we have two instruments while in the second we have four.
SHIOK! Records is a record label dedicated to the discovery of the extensive and rich music tradition of the various South East Asia countries.
Operating right from the heart of the region, in the strategic location of Singapore, SHIOK! Records' core mission is to provide a musical outlook on some "hidden gems" that are still mostly unknown to the vast majority of the western audiophiles' audience.
By following an chronological and anthological approach, SHIOK! Records publishes music deeply rooted in the history, folkways and traditions of the mighty and exotic territories of the East. With a specific focus on the lush production of Indonesia for its first issues, SHIOK! Records ventures into the various music genres of Malaysia, Philippines, Thailand, Cambodia and Vietnam.
wishlist
published in July 2017
vinyl LP
11 tracks
sold out