Sounds from the Archipelago – An Introduction to the Lush Indonesian Music Tradition – Vol. 1 (vinyl LP) 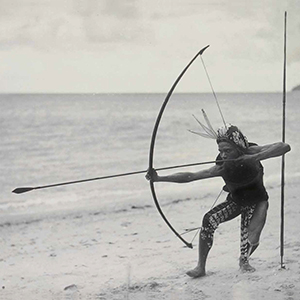 wishlist
This first volume gathers traditional music from different areas of the Indonesian archipelago, featuring music from Sulawesi, The Moluccas Islands (Spice Islands) and Central Java.
In the first track from Sulawesi (“Gandrung Bulo”), the lead is taken by the percussion made of bamboo drums, later joined by two male voices in the second track. This is traditional entertainment music which is typically played at weddings, feasts and others special occasions. The last track is an instrumental one featuring the story-telling of an epic ballad. The singer is playing a traditional indonesian instrument called Sinrili.
The track from the Moluccas (“Tjakalele: War Dance”) is a typical Warrior Dance, and it is recorded in the main city of Maluku Islands.
The music from Bali is performed by a chorus of seventy-eight men sitting in circle around the actors, during the representation of the so-called Ketchak (Monkey) Dance, which is still a big attraction for travellers coming to Bali.
The selection from Central Java is a traditional piece called Perdjuritan dance (“Perdjuritan”), which is some sort of a soldiers' dance.
It is performed by a traditional javanese orchestra (called Gamelan) with insertions of drums, metal rattles and whistles.
The last sample is recorded in the capital city of Jakarta and represents an example of the so called Sundanese music, typical of the western region of Java. Another example of traditional old entertainment music to be played during various festivities.
SHIOK! Records is a record label dedicated to the discovery of the extensive and rich music tradition of the various South East Asia countries.
Operating right from the heart of the region, in the strategic location of Singapore, SHIOK! Records' core mission is to provide a musical outlook on some "hidden gems" that are still mostly unknown to the vast majority of the western audiophiles' audience.
By following an chronological and anthological approach, SHIOK! Records publishes music deeply rooted in the history, folkways and traditions of the mighty and exotic territories of the East. With a specific focus on the lush production of Indonesia for its first issues, SHIOK! Records ventures into the various music genres of Malaysia, Philippines, Thailand, Cambodia and Vietnam.
wishlist
published in July 2017
vinyl LP
10 tracks
sold out