Nikolai Evreinov – The Storming of the Winter Palace 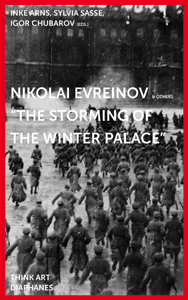 order
wishlist
A collective study on the theatrical reenactment of the storming of the Winter Palace by Soviet dramatist Nicolas Evreïnoff, on the occasion of the October Revolution's third anniversary. This staging of the beginning of the revolution, performed by 10.000 people, is documented thanks to an ensemble of texts, photographs, and drawings.
In 1920, the third anniversary of the October Revolution, the Storming of the Winter Palace was performed with a cast of 10,000. The mass spectacle, directed by Nikolai Evreinov, was a kind of false, deceptive reenactment. It was intended to recall something—the storming of the Winter Palace as the beginning of the revolution—that it itself produced as a theatrical medium. This volume reconstructs the event with texts, photographs, and drawings, and shows how not only in the Soviet Union did the photograph of the theatrical “storming” became a historical document of the October Revolution.
Nicolas Evreïnoff (1879-1953), theater theorist, director, and playwright, gained renown with his theories on the "natural" theatricality of human beings, "theater as such," and "theater for itself." His plays—monodramas and pieces that staged his idea of theater therapy—were rather aesthetically conventional. Evreinov already became involved in replications and reenactments at the Starinnyi Theater (Antiquarian Theater), which he co-founded and where he reconstructed and reenacted historical performances. Even after emigrating to Paris in 1924, he monitored the theatricalization of the Soviet Union, writing among other things a piece about show trials entitled The Steps of Nemesis (Shagi nemezidy), which reenacted them as theater.
order wishlist
Edited by Igor Chubarov, Inke Arns, Sylvia Sasse.
published in October 2017
English edition
16 x 22,5 cm (softcover)
304 pages (42 color ill.)
30.00 €
ISBN : 978-3-03734-991-5
EAN : 9783037349915
in stock
press releases
Critique d'art, Lola Lorant, 2018 (PDF)