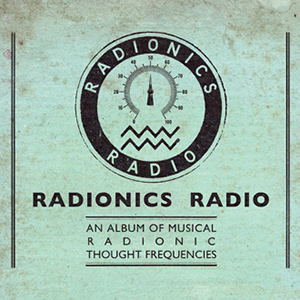 order
Daniel Wilson's Radionics Radio project draws upon the fringe-science of “radionics”, with its invisible forces and psychic resonances, to spawn electroacoustic and electronic compositions employing very alternative tuning systems.
Radionics' idea that thoughts can be represented as frequencies is vigorously explored on this new release through microtonal compositions which range from mutating drones to electronic sambas, with nods to Raymond Scott and Daphne Oram along the way.
In 1962, Oxford's Delawarr Laboratories built their groundbreaking Multi-Oscillator instrument comprising multiple electronic tone generators. The Multi-Oscillator was the summation of all Delawarr Laboratories' acoustical research into radionics. It was a strange instrument far ahead of its time. In a process best described as “dowsing with oscillators,” the unorthodox device was employed intuitively to select clusters of frequencies that embodied thoughts, ailments or concepts. The Laboratory submitted an application to broadcast the resulting thought-frequency tones over the radio, but were denied a broadcasting license.
In 2014, Resonance FM's Sound and Music Embedded Composer in Residence Daniel Wilson launched Radionics Radio. Through an online app replicating Delawarr's Multi-Oscillator, users submitted their own thoughts and frequencies for radio broadcast. Along with a dozen original works, an exclusive 1968 tape recording of the original Multi-Oscillator is also featured on this CD.
Daniel Wilson, who records under the alias Meadow House and performs in electroacoustic quartet Oscillatorial Binnage, has long been interested in composing with found physical objects and working within the restrictive tunings offered by those objects. Radionics Radio is an extension of this: the submitted thought-frequencies are themselves “found objects,” each with their own unique harmonic worlds. All sounds heard in the Radionics Radio compositions are strictly derived only from the respective submitted thought-frequencies. This is an album unlike any other, and, if radionic theory is to be believed, one that contains more than the sum of its parts.
Daniel Wilson is a composer, sound designer, writer and instrument builder. He also works under the alias Meadow House.
order
published in September 2016
CD digipack + 20 page booklet
13 tracks
15.00 10.00 €
(special offer)
in stock