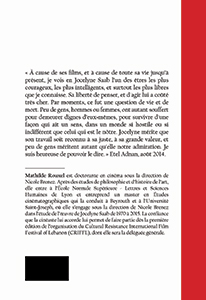 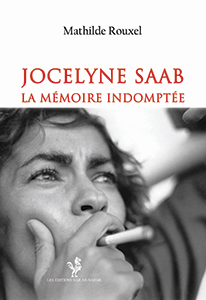 order
wishlist
The first monogaphic study dedicated to French-Lebanese filmmaker and photograph Jocelyne Saab and her works from 1970 to 2015.
Jocelyne Saab (1948-2019) is a Franco-Lebanese director. She started her career hosting a pop music program on the national Lebanese radio called “Marsupilami has got blue eyes”, and from there moved on to become a news anchor on television. Civil war in Lebanon threw her onto the front line and in the field as a war reporter. Le Liban dans la tourmente in 1975 was her first long documentary. From that point forward, she covered the wars in the Middle-East and Iran, as well as the Polisario war in Maghreb. Her independent films received numerous international prizes. In 1982, she covers the Israeli invasion of Lebanon in her film Beirut My City. She later went to South-East Asia, post-war Vietnam specifically, where she shot The Lady of Saigon for which she won the best French documentary prize. In 1981 she landed the job of second unit director on Volker Schlondorff's Circle of Deceit—a movie focusing on the Lebanese civil war. In 1985 her first feature film Suspended Life shot in the middle of the civil war in Beirut was selected for the 1985 Cannes Film Festival. In 1991 she directed Once Upon a time in Beirut, dedicated to the century of the cinema and the founding of the Lebanese cinematheque. In 2005, she received death threats by Egyptian fundamentalists for her film Dunia. Since 2007, and in parallel to her activity as a filmmaker, Jocelyne Saab started a career as a visual artist and photographer.
Mathilde Rouxel is a PhD student in cinema under the supervision of Nicole Brenez. She is also the General Delegate of the Cultural Resistance International Film Festival of Lebanon (CRIFFL).
order wishlist
Published by Dar An-Nahar Editions, Beirut.
published in April 2016
French edition
16 x 24 cm (softcover)
288 pages
23.00 €
ISBN : 978-9953-74-411-7
EAN : 9789953744117
in stock
table of contents 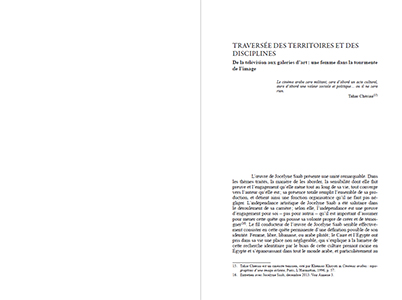 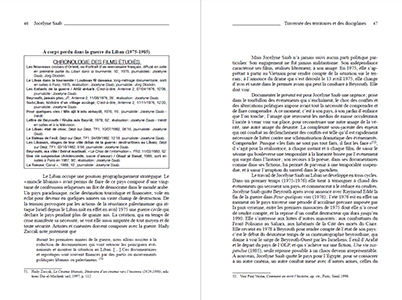 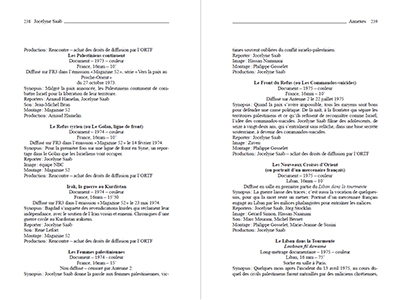