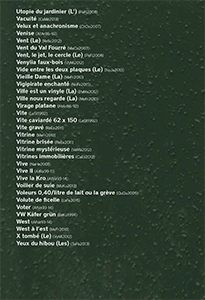 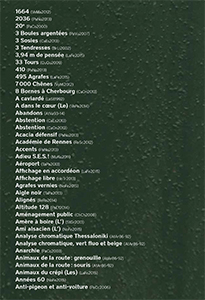 order
Dector & Dupuy's artistic research focuses on the city as a space for improvisation and vanishing lines. This retrospective monograph listed in alphabetical order comes with an additional publication—the first issue of the duo's periodic SONG.
This monograph dedicated to the work of Dector and Dupuy presents the density of the artists' research into their subject, the city, its improvisatory spaces and its escape routes. “During the twenty years that they have worked together, Dector and Dupuy's investigations address the tracks and marks of conflict, the expressing of demands and the wild writings that they find in public places—on walls, but also on roads—and in every nook and cranny of the city(...) Both artists create exhibitions, guided tours and diverse printed media from these gatherings” (Jean-Marc Huitorel).
Thinking through the conception of the book led the artists to imagine an atypical way of classifying their works in a non-chronological manner. The book became a space of creation where every stage – from the design to the manufacturing – was conceived in the spirit of their work. During the first exchanges with graphic designer, Jocelyne Fracheboud and editor, Valérie Cudel, Dector and Dupuy provided a list of works, exhibitions and places where performance-visites were staged. Every title, placed in alphabetic order, is accompanied by a code composed from the year, the origin and the city. This list forms the vertebral column of the book. It indicates the intermediate state of a production in a state of continuous revisiting and reinterpretation; it dictates the order of the Clusters and the texts, filed according to title; it drives a constant rhythm that begins on the front cover and breaks off rather than concludes…on the back cover.
The fifteen Clusters—the only entries without a code—disrupt the flow. In accordance with their name, a group of works is reproduced in colour then documented with short notes and black and white photographs. The Clusters facilitate both an archiving of and a transverse reading of the production. They provide a ruse for combining all the forms that Dector and Dupuy generate through their actions—those that they reveal or those they resuscitate. The section “Legend” replaces the traditional biography, a resumption of the elements in the list in connection with artistic institutions and appearances; geographical ranking is substituted for traditional chronology. “Legend” is a disguised curriculum vitae.
To represent the publications in various forms and sizes that are essential to Dector and Dupuy's practice and often accompany their works and exhibitions, the artists were invited to imagine a separate publication to be inserted in the heart of the monograph. «Song» is the first issue of an imagined journal, the publication of which will take place upon invitation or by the artists' own initiative. “Song” is promptly filed in the list and functions like a bookmark. “Song” was designed separately to the monograph and opens the classically retrospective monograph to a future.
A detail from a photograph of paint used in public spaces «to prevent putting up posters» is used on the book's cover. The use of emboss effect varnish underlines the paint's rough surface without detracting in any way from reading the first and last elements in the list. Printed in bold throughout (in District font), the book ultimately takes on a performative feel, like a long poem demanding to be read in a loud voice—the megaphone of the multiple, the “poetic poaching” that Dector and Dupuy invite us to observe.
Published on the occasion of the exhibition “PaCo2016” at gallery Contexts, Paris, from January 14 to February 6, 2016.
Born 1951 and 1949 respectively, Michel Dector and Michel Dupuy live and work in Paris.
order
Edited by Valérie Cudel.
Texts by Dector & Dupuy, Keren Detton, Jean-Marc Huitorel; interview with the artists by Christophe Domino. 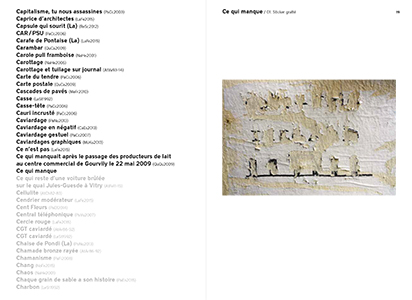 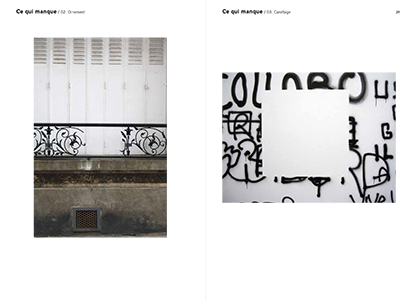 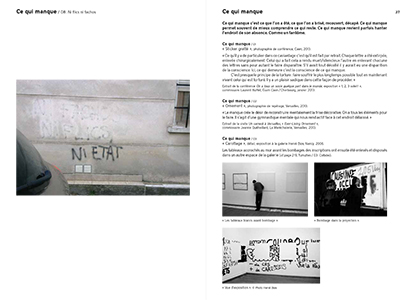 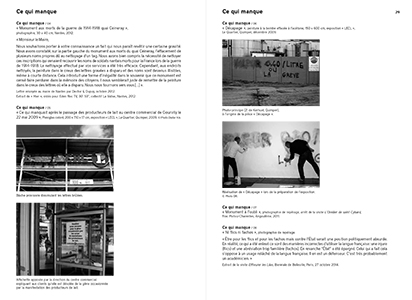 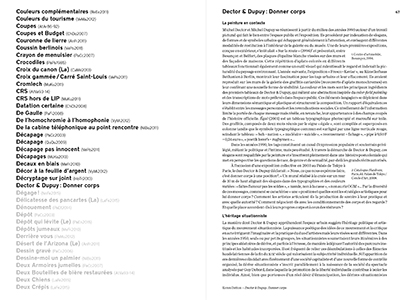 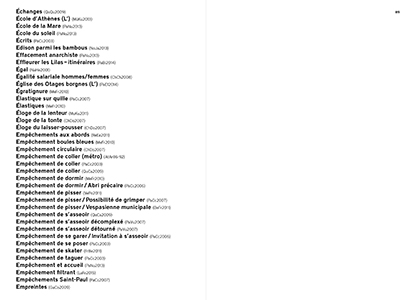 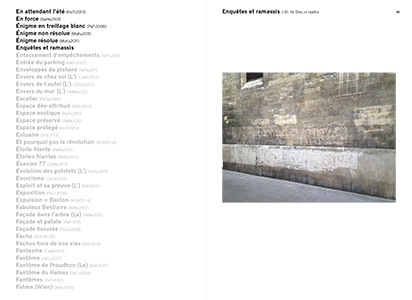 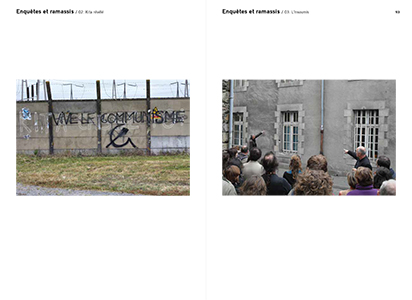 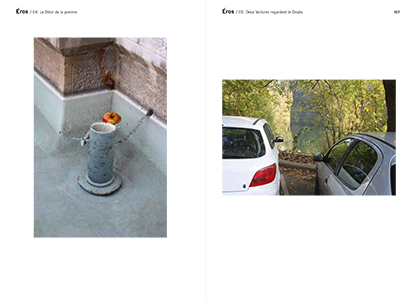 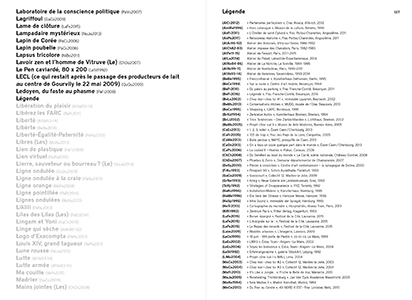 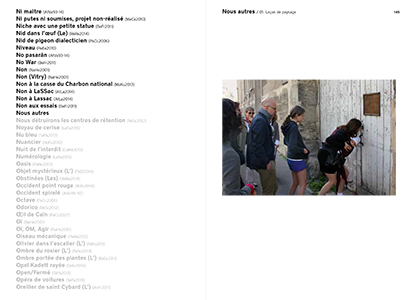 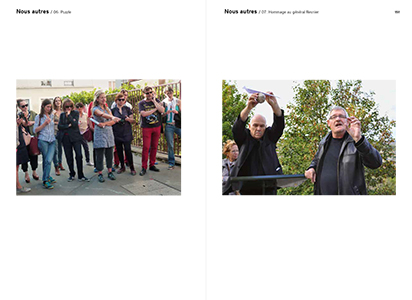 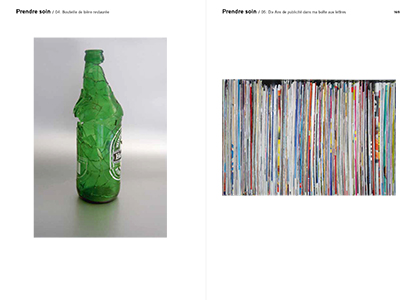 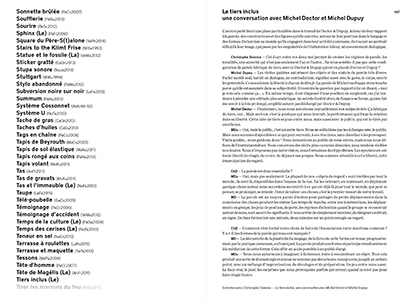 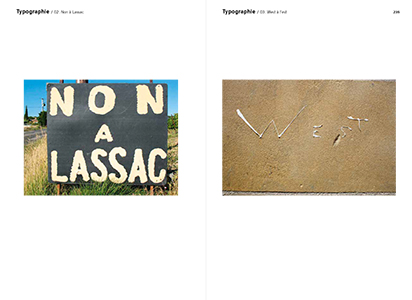 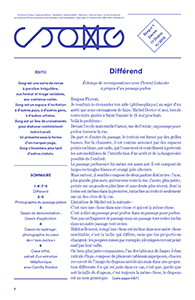 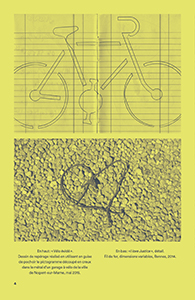