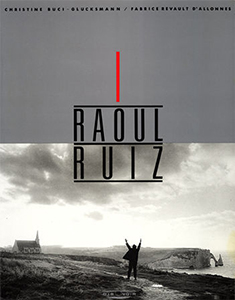 order
wishlist
A retrospect on the abundant work of this poetic artist, explorer of images and builder of labyrinths who expresses himself on film, in the theater and in his writings. Interview with, and visual lay-out by Raul Ruiz.
Three Crowns of a Sailor, The Hypothesis of the Stolen Painting, City of Pirates, Life is a Dream, Treasure Island… These films form only a tiny part of a sum of work impossible to classify. In-between reality and fiction, Ruiz's work proceed to an allegorical examination of multiple viewpoints. Magician of appearances and joyful creator of literary and cinematographic mockeries, Raul Ruiz's amazing film chemistry adopts and recycles traditions of both popular and legitimate cultures.
This publication received the Centre National de la Cinematographie's prize for the best book on cinema in 1988.
Raoul Ruiz (1941 – 2011) is a Chilean filmmaker, theater director and writer. A key figure of the New Latin American Cinema, politically engaged, he was forced to exile after Pinochet's coup d'etat in 1973. His work features over 100 films such as Tres tristes tigres (1968), Palomita blanca (1973), Klimt (2006) and Mysteries of Lisbon (2010).
order wishlist
Texts by Christine Buci-Gluckmann and Fabrice Revault d'Allonnes; interview with Raoul Ruiz.