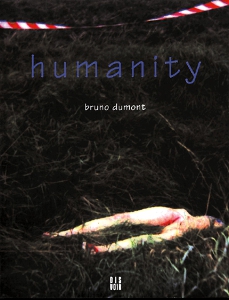 order
wishlist
The corpse of a girl child found in the countryside shakes the dreary existence of a candid investigator. An illustrated book behind the film of the same name by Bruno Dumont.
This is the story of a simple man. Young and unassuming. He believes in us all. Pharaon's work on a sordid investigation slowly exposes his despair and dread of his own guilt. A universal guilt, that of our very own monstrous nature. Following the startling success of his first feature-length film, Life of Jesus, Bruno Dumont's Humanity made a remarkable debut in 1999 at the Cannes Film Festival presided over by David Cronenberg, where it won the Grand Jury Prize. Presented here is the novel, which was used as the basis for the film script, and 70 still images from the movie.
Born 1958 in Bailleul (France), Bruno Dumont is an author and filmmaker. His first two films Life of Jesus (1997) and L'Humanité (1999) were awarded at Cannes Festival.
order wishlist
published in September 2001
English edition
16,5 x 21,5 cm (softcover)
128 pages (65 b/w ill.)
25.00 €
ISBN : 978-2-914563-00-0
EAN : 9782914563000
in stock