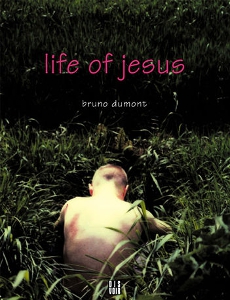 order
wishlist
Life of Jesus is the chronicle of a confused French youth. The novel was used as the basis for the eponymous film by Bruno Dumont.
Life of Jesus charts a nasty boy's thorny path to redemption. In '90s Northern France a motorbiking gang remain otiose, foul-mouthed, reckless while nominally leaving their teen years behind. Freddy lives with his widowed mother, a barmaid, and a pet finch, Leo. Unlike Marie, his girlfriend, he doesn't hold a job and is too shiftless to look for one. When Kadder starts taking an interest in Marie, Freddy goes into jealous overdrive and, helped by his buddies, stomps the Arab boy to death on a country road...