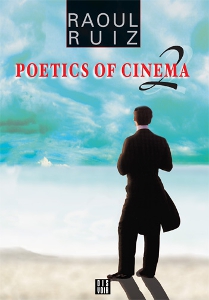 order
wishlist
Following his research in Poetics of cinema, 1 on new narrative models as tools for apprehending a fast-shifting world, Raoul Ruiz with Poetics of cinema 2 makes an appeal for an entirely new way of filming, writing, and of conceiving the image.
“Eleven years separate these lines from the first part of my Poetics of Cinema. Meanwhile the world has changed and cinema with it. Poetics of Cinema, 1 had much of a call to arms about it. What I write today is rather more of a consolatio philosophica. However, let no one be mistaken about this, a healthy pessimism may be better than a suicidal optimism.”
Raoul Ruiz
See also Raoul Ruiz: Poetics of Cinema 1.
Raoul Ruiz (1941–2011) was an experimental Chilean filmmaker, writer, teacher and theater director. A key figure of the New Latin American Cinema, politically engaged, he was forced to exile after Pinochet's coup d'etat in 1973. His work features over 100 films such as Tres tristes tigres (1968), Palomita blanca (1973), Dark at Noon (1992) starring John Hurt, Three Lives and Only One Death (1996) starring Marcello Mastroianni, Genealogies of a Crime (1997) starring Catherine Deneuve, Time Regained (1999) and Klimt (2006) starring John Malkovich, and Mysteries of Lisbon (2010).
order wishlist
published in November 2006
English edition
15 x 21 cm (softcover)
112 pages
22.00 €
ISBN : 978-2-914563-25-3
EAN : 9782914563253
in stock