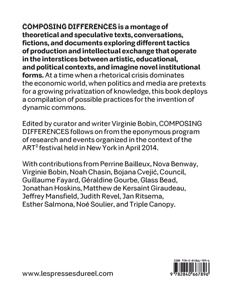 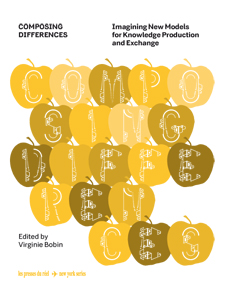 order
wishlist
Composing Differences is a montage of theoretical and speculative texts, conversations, fictions, and documents exploring different tactics of production and intellectual exchange that operate in the interstices between artistic, educational, and political contexts, and imagine novel institutional forms.
At a time when a rhetorical crisis dominates the economic world, when politics and media are pretexts for a growing privatization of knowledge, this book deploys a compilation of possible practices for the invention of dynamic commons.
Edited by curator and writer Virginie Bobin, Composing Differences follows on from the eponymous program of research and events organized in the context of the ART² festival held in New York in April 2014.
The book is part of the New York series, created conjunctively by Les presses du réel and the French Cultural Services in New York to publish theoretical texts in English not only on contemporary art but also on dance, and on emerging American performance that is more in line with French thinking. The series is inspired by a simple assumption: that contemporary culture is a public good that offers perspective on the questions of our time. Today, contemporary art is increasingly merchandised and yet undervalued in its capacity to give new perspective on the globalized world in which we live. Keeping up with international debates, this series attempts to support that budding perspective.
order wishlist
Edited by Virginie Bobin.
Contributions by Perrine Bailleux, Nova Benway, Virginie Bobin, Noah Chasin, Bojana Cvejić, Council, Guillaume Fayard, Géraldine Gourbe, Glass Bead, Jonathan Hoskins, Matthew de Kersaint Giraudeau, Jeffrey Mansfield, Judith Revel, Jan Ritsema, Esther Salmona, Noé Soulier, Triple Canopy. 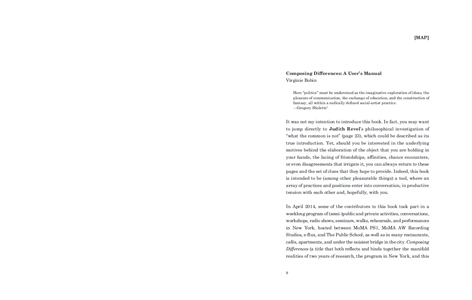 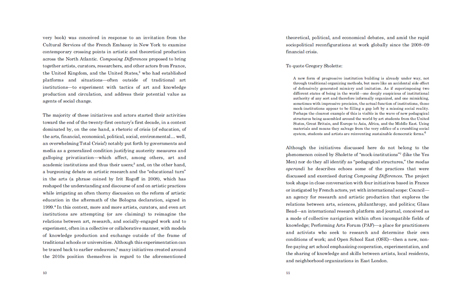 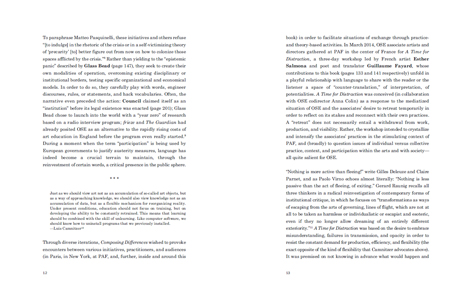