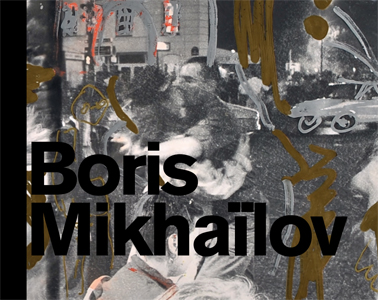 order
wishlist
A previously unpublished series of photographs taken in 1989 in Arles and Paris, retouched by Boris Mikhailov 26 years later.
The series “Arles, Paris … and.” from 1989 comprises 67 photographs, each one a fully-fledged work of art which the artist has retouched 26 years later, offering a fresh perspective on his work.
Born in Kharkov, Ukraine, Boris Mikhaïlov suffered harassment of the kind any totalitarian regime metes out to free expression: his photographs were considered too political or morally subversive and destroyed. Rolls of film were burned, cameras broken.
Mikhaïlov made his first trip to the West shortly after the collapse of the Soviet Bloc in 1989, in a new climate of freedom. He came to France, and the series “Arles, Paris … and.” stands as testimony to his discovery of a world that was quite new to him. It conveys his wonder, his disbelief and his sense of derision in this totally new reality.
On his journey to Arles and Paris, the artist took a standard camera plus a Horizont, a camera suited to panoramic photos that he would later use for two famous series, “By the Ground” (1991) and “At Dusk” (1993). Comparing the two kinds of images, Mikhaïlov decided that he preferred the horizontal photographs, because they more effectively captured the sweeping, lateral movement of the gaze, and the breadth of the disc overies that he was making.
In Paris he was struck by the light, the bustling, joyous atmosphere in contrast with the grey gloom he had known in the East. To convey this impression, he coloured each photograph, heightening the outlines with strokes of gol d or silver, and redrew certain details.
In 1989, Mikhaïlov was far from alone in casting a new gaze on our capitalist Western world. Once again, the artist emphasises the fact that individual destinies are grounded in and shaped by a political context. But he also reminds us that, as his own life demonstrates, our sense of wonder and enthusiasm depend on us as individuals.
Published on the occasion of the eponymous exhibition at Suzanne Tarasieve, Paris, January-February 2015.
Born 1938 in Kharkov, Ukraine, Boris Mikhailov lives and works in Kharkov and Berlin.