Anders Olsson is a Swedish writer, professor of literature at Stockholm University, and member of the Swedish Academy that awards the Nobel Prize in Literature. Olsson has written some fifteen books on poetry and the history of literature. 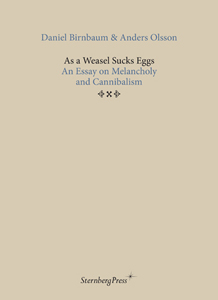 Daniel Birnbaum, Anders Olsson
As a Weasel Sucks Eggs – An Essay on Melancholy and Cannibalism
2008
English edition
Sternberg Press - History, Criticism and Theory
out of stock
As a Weasel Sucks Eggs examines the enigmatic relation of melancholia to an early kind of cannibalism, which psychoanalysis, in particular, stressed. It contains readings of, amongst others, Franz Kafka, Samuel Beckett, Thomas Bernhard, Sigmund Freud, G. W. F. Hegel, and the Swedish poet Gunnar Ekelöf.