Born on April 8th, 1982 in Quimper, Alan Fertil grew up in Brittany and Tennessee, USA (1991–1993). He soon became interested in drawing, board sports, and urban culture. His passions began to blossom in 1997 in Nottingham, England, where the importance given to artistic teaching gave him confidence in his choices. He began his studies there at Clarendon College, followed by l'Ecole Nationale Supérieure des Beaux- Arts in Paris from 2001, where he studied in Anne Rochette's studio. He obtained a scholarship to study at the School of the Museum of Fine Arts (SFMA) in Boston in 2005. Following his graduation in 2007, he moved to Berlin to pursue his artistic practice, working principally in drawing and sculpture.
Alan Fertil moved to Brussels in the end of 2009, and soon after met Damien Teixidor. Together they developed a collaborative practice around a common outlook on certain objects and cultural phenomena. Through analogical manipulations, they transposed underground narratives into communal, familiar ones. Fertil & Teixidor borrowed, appropriated, and diluted objects, aesthetics, and approaches adopted from DIY (do it yourself ), skate culture, urban landscape and public space.
Alan Fertil was also a co-founder and active member of the curatorial collective "The Ister", with Constance Barrère Dangleterre, Hugo Charle, Olivier Douard, Marie de Gaulejac, Vincent de Hoÿm, Bitsy Knox, Lila Pérès and Damien Teixidor. From 2010 Alan Fertil also worked as a freelance technician and translator for galleries, art centres, and artists. In 2014, he renewed his focus on his solo art practice. He passed away in Brussels on August 7th, 2015 after an accidental fall. 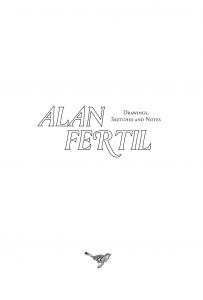