BANK was an artists' group fonded in London in 1991 by John Russell and Simon Bedwell, with Dino Demosthenous (who left in 1992) and joined by Milly Thompson, David Burrows and Andrew Williamson in 1993. They curated a series of group shows, often with comical, and sometimes offensive, titles. As a group they adopted an aggressive stance towards the mainstream contemporary art scene of the time. BANK also published a satirical magazine delivering tabloid-style critiques of the art world. 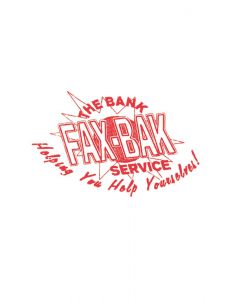 The BANK Fax-Bak Service
2021
bilingual edition (English / French)
Lenz Press
sold out
A comprehensive record of the London-based art collective BANK's notorious project from the late 1990s, a fierce critic of the language elements of the art market.