Anne-Margot Ramstein (born 1984 on the Réunion Island) graduated from the École des Arts Décoratifs of Strasbourg in 2009. Today she is a French artist and illustrator whose work has appeared in Le Monde, among other publications. 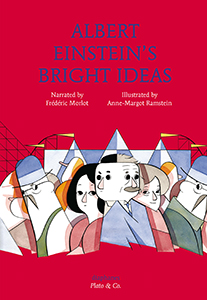 Frédéric Morlot, Anne-Margot Ramstein
Albert Einstein's Bright Ideas
2017
English edition
Diaphanes - Plato & Co.
The young Albert Einstein has a very important job: he must deliver electricity to the big Oktoberfest celebration in Munich. As he hurries from one merry-go-round to another, nothing seems to be going as planned. With his sister, Maja, Heinrich the dog, and Niels Bohr, a qualified dwarf-thrower, can he win a battle against the laws of the universe? The key just may lie in the question of whether a dumpling can fly faster than light (an illustrated philosophy book for children).